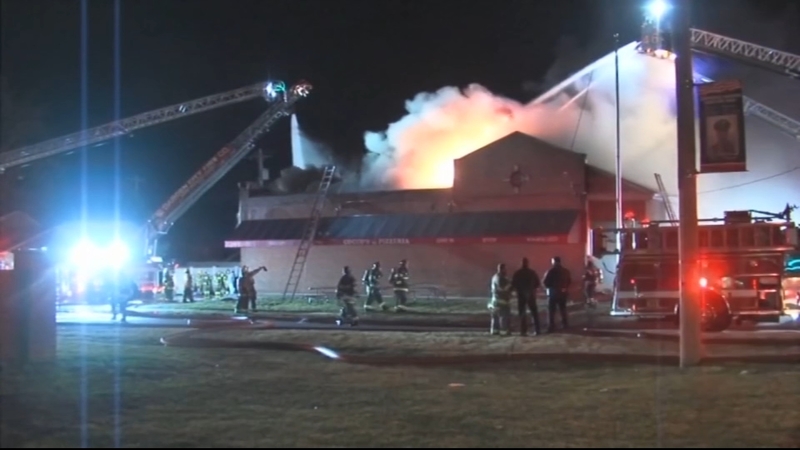 Fire crews said the flames started inside Cocco's Pizzeria and spread to neighboring businesses including Liberty Tax and Rose's Nails.

They said the roof of the entire building housing the businesses collapsed.

"Just as we exited the building, apparently the wind conditions picked up, and it really fanned the fire from the north to the south," said Charles Leslie, the fire marshal for the borough of Brookhaven.

Firefighters got the fire under control around 5:30 a.m., but remained on the scene putting out hot spots.

"It's a building. We can rebuild. We can't bring back a life. God forbid," Leslie said.

Leslie does say it's a big loss for the Brookhaven community.

The pizzeria has been there for 34 years. After the fire, the building, and all three businesses in it, are a total loss.

"It's just very shocking," said John Loughren, the owner of the Coco's Pizzeria.

Loughren says after a difficult year of navigating the pandemic, he's at a loss for what to do next.

"I worked really hard to make this successful. I opened up every day for the last year and a half except maybe six or seven days," said Loughren. "So this is very upsetting to see the damage this has done. I mean, it's gone."

It's one of seven pizza places with the Cocco's brand in Delaware County. The owner of the chain says he will do whatever he can to help rebuild the Brookhaven store.

"We love Brookhaven and our intent at this time is to rebuild and come back stronger than ever," said Michael Cocco. He also said he's hoping to help the 15 employees of this shop find jobs at other locations. The next closest store in Aston is expanding its delivery and offering a discount to Brookhaven customers.

Cocco's Pizza released a statement to its customers: