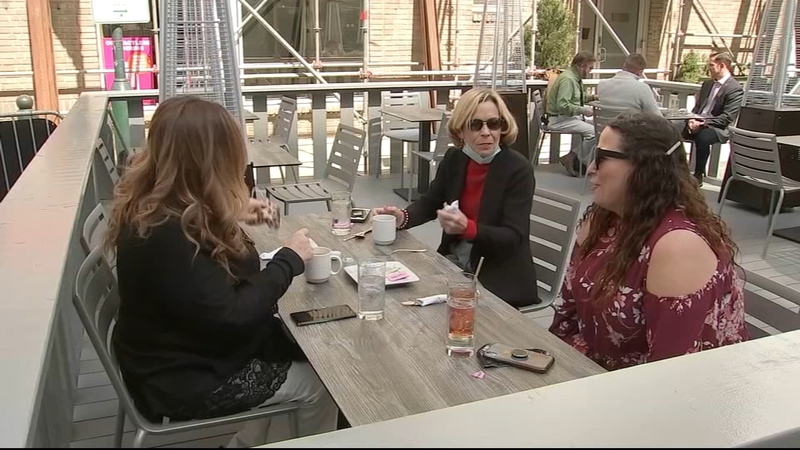 PHILADELPHIA (WPVI) -- Center City Philadelphia is starting to see a resurgence one year after the start of the pandemic and 10 months after riots caused some businesses to shut down.

On Tuesday, Marathon Grill, at 16th and Sansom streets, reopened for the first time since May. It's the anchor of a block shut-off for outdoor dining.

As the cooks fired up the grill, diners marveled at the changes.

"I think it's a great setup. I like that they shut down the street. I think that it's important for the restaurants," said Rachel Blum from Ambler.

For the restaurant, the lunch crowd brought hope, especially since all seemed lost 10 months ago.

"...(Rioters) took all the furniture and put it in the street and burnt the furniture. All the windows were broken," said Owner Sheryl Borish.

It took almost a year and hundreds of thousands of dollars to rebuild after last summer's riots. Next door, a salon will never reopen and further down the block, a men's clothing store decided to move because of the pandemic.

"It's been very difficult because we've been here so long and Marathon is an institution in the city," said Borish.

The Center City District said the reopening of Marathon shows the neighborhood is trending in the right direction, but there's still a long way to go.

"Now, our next goal, of course, is to get our office buildings open fully, safely, so we can get more people in the city," said Philadelphia Councilmember At-Large Allan Domb, who's also a real estate developer.

Some diners said they are back to work in their Center City offices and they missed their favorite lunch spot.

"Glorious to be back out with the living in the sunshine especially. It's just great to see," said Alicia Lupold from Glen Mills.