"You're Not Lost: Creating the Career you want, not what's being determined for you!"

"You're Not Lost: Creating the Career you want, not what's being determined for you!"

Meteorologist Cecil Tynan talks with Qurate Retail Group's Beth Rubino about how to grow your career and move forward in your company.

Tuesday, October 1st, 2019
Pennsylvania Convention Center
1:00 pm - 5:00 pm
The PA Conference for Women WORKPLACE SUMMIT will take place on Tuesday, October 1st, 2019 from at the PA Convention Center. The Summit explores how diversity & inclusion helps promote gender partnerships in the workplace to drive profitability and innovation. Registration is open to both men and women work colleagues for this half-day conference. Learn more. 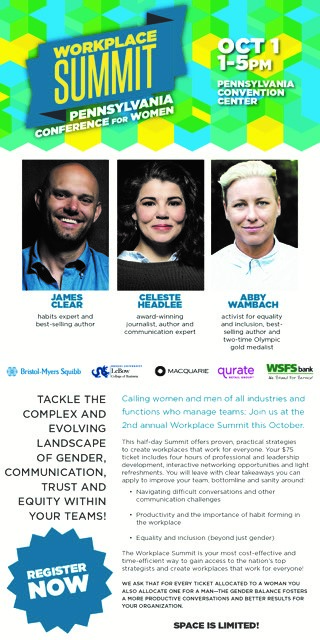 is an Academy Award nominee, and winner of the Emmy, the BAFTA and the Peabody. She is a writer, director, producer and film distributor. Her directorial work includes the Oscar-winning historical drama SELMA, the Oscar-nominated criminal justice documentary 13TH, and Disney's A WRINKLE IN TIME, on which she became the highest grossing black woman filmmaker in American cinema history. She is currently in production on her next project based on the infamous case known as CENTRAL PARK FIVE, while overseeing production of her hit TV series QUEEN SUGAR. Winner of the 2012 Sundance Film Festival's Best Director Prize for her micro-budget film MIDDLE OF NOWHERE, DuVernay amplifies the work of people of color and women of all kinds through her independent film collective ARRAY, named one of Fast Company's Most Innovative Companies. In 2017, she was featured as one of Fortune magazine's 50 Greatest Culture Leaders and TIME magazine's 100 Most Influential People. DuVernay sits on the boards of Sundance Institute and Film Independent. @ava

is a MacArthur Genius, and two-time National Book Award winner. She has been called "the new Toni Morrison" (American Booksellers Association). In 2017, she became the first woman and first person of color to win the National Book Award twice-joining the ranks of William Faulkner, Saul Bellow, John Cheever, Philip Roth, and John Updike. Ward's novels, primarily set on Mississippi's Gulf Coast, are deeply informed by the trauma of Hurricane Katrina. Salvage the Bones, winner of the 2011 National Book Award, is a troubling but ultimately empowering tale of familial bonds set amid the chaos of the hurricane. Ward's memoir, Men We Reaped, deals with the loss of five young men in her life-to drugs, accidents, suicide, and the bad luck that follows people who live in poverty. In 2016, Ward edited the critically acclaimed anthology The Fire This Time: A New Generation Speaks About Race, a New York Times best-seller. Her newest novel, the critically acclaimed Sing, Unburied, Sing, won the 2017 National Book Award. Sing was named one of the best books of 2017 by The New York Times, Time, The Washington Post, and Publisher's Weekly. Sing was also nominated for the PEN/Faulkner Award, the National Book Critics Circle Award, and the Aspen Words Literary Prize. An associate professor of creative writing at Tulane University, Ward received the 2016 Strauss Living Award and a 2017 MacArthur Genius Grant, and was named one of Time's 100 most influential people of 2018. Scribner recently reissued her debut novel, Where The Line Bleeds. @jesmimi

is the author of Eat Pray Love. Exploding onto the scene in 2006, the best-seller famously chronicled the year Gilbert spent traveling the world after a shattering divorce. Translated into more than thirty languages, Eat Pray Love has sold over thirteen million copies worldwide, and in 2010, was made into a feature film starring Julia Roberts and Javier Bardem. Her writing has been published in Harper's Bazaar, Spin, and The New York Times Magazine. Gilbert was a finalist for the National Magazine Award, and her work was anthologized in Best American Writing 2001. Her first book, Pilgrims, was a New York Times Most Notable Book, and won a Ploughshares prize. Her first novel, Stern Men, won the Kate Chopin Award in 2001. The Last American Man, which compellingly explores America's long-standing intrigue with the pioneer lifestyle, was a finalist for the National Book Award. In Committed: A Love Story, the anticipated follow-up to Eat Pray Love, Gilbert tells the story of her unexpected plunge into second marriage. The Signature of All Things, Gilbert's first novel in over a decade, was named one of the Best Books of the Year by The New York Times, O, The Oprah Magazine, NPR, and Time. Out of the period of introspection following Eat Pray Love, came Gilbert's brilliant nonfiction treatise, Big Magic: Creative Living Beyond Fear. In 2019, she'll return to fiction with City of Girls, a love story set in the New York City theater world during the 1940s. @gilbertliz

is a personal development keynote speaker and New York Times best-selling author of Atomic Habits. His entertaining talks teach audiences about small habits, decision-making, and continuous improvement. But Clear doesn't merely report the research of others. He tries out the concepts for himself as he experiments with building better habits as an entrepreneur, writer, and weightlifter. In the end, his talks end up being one-part storytelling, one-part academic research, and one-part personal experiment, forming a colorful blend of inspirational stories, academic science, and hard-earned wisdom. His thought leadership regularly appears in the New York Times, Entrepreneur, Business Insider, Medium, and Time, and he is a regular guest for CBS This Morning. In addition, he helps millions of visitors each month through his website and hundreds of thousands subscribe through his popular email newsletter. He is a regular speaker at Fortune 500 companies, and his work has been used by teams in the NFL, NBA, and MLB. Through his online course, The Habits Academy, Clear has taught more than 10,000 leaders, managers, coaches, and teachers how to improve. @jamesclear

are co-founders and co-CEOs of theSkimm, a membership company dedicated to helping millennial women live smarter. The two former news producers launched theSkimm from their couch in 2012, and have built a brand that continues to be a trusted source to their more than seven million daily subscribers. theSkimm is committed to helping its members tackle big decision-making moments in life by giving them the information they need to make informed and empowered choices whether that be in civic engagement, finance, career, health, and more. theSkimm's flagship product, the Daily Skimm, is still the fastest growing newsletter on the market, and the company's product suite has grown to engage with members at home, work, and on-the-go, including theSkimm app and Skimm Studios. theSkimm's first book, How to Skimm Your Life, was released in June 2019 and debuted at #1 on the New York Times Best Seller list. Zakin and Weisberg have been featured on Forbes 30 Under 30 in Media, Vanity Fair's The Next Establishment, Fortune's 40 Under 40, and Adweek's Young Influentials. You've also seen them in TIME's Most Influential People, Marie Claire's New Guard, and they were named one of the most 100 Intriguing Entrepreneurs by the Goldman Sachs Builders and Innovators Summit. They still prefer to work from a couch. 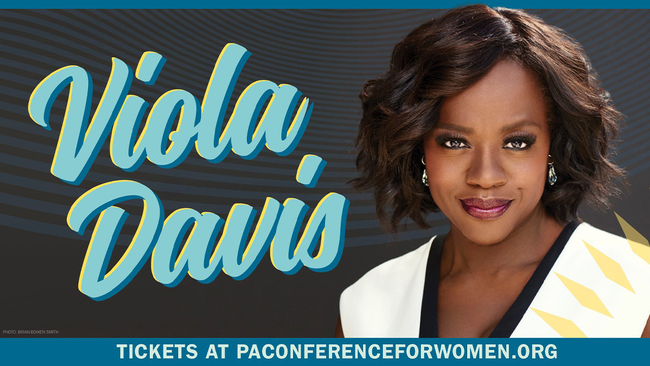 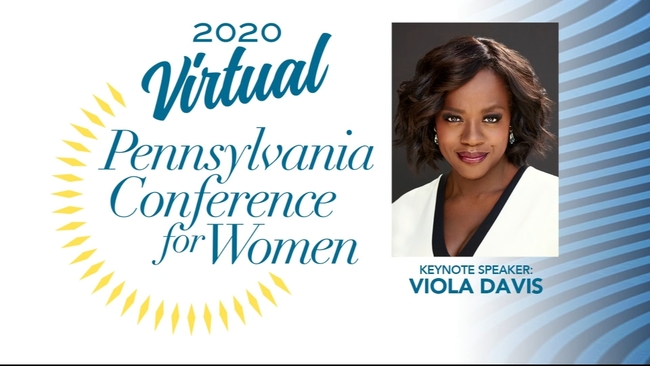 Pa. Conference for Women continues to inspire, despite being held virtually 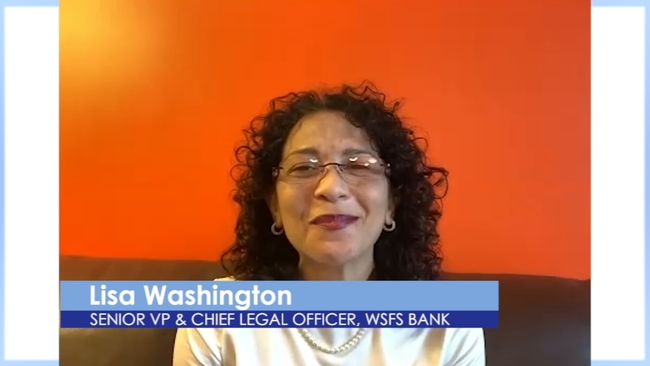 How to adapt to the pandemic in your professional life