'You're Still My Hero:' Carson Wentz's positive impact on Eagles fans during his time in Philly 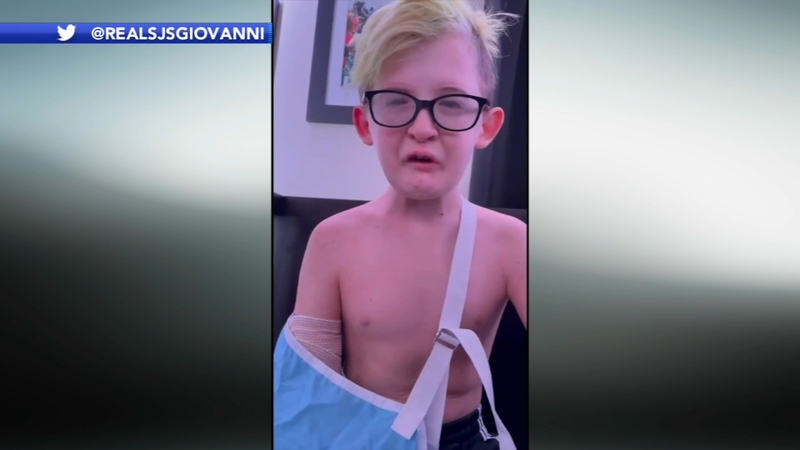 PHILADELPHIA (WPVI) -- Carson Wentz's time in Philadelphia was a rollercoaster of emotions.

At one time, he was seen as the city's next breakout football star. The savior to lead the Eagles to a dynasty of championships and yearly parades down Broad Street.

At other times, he was seen as not a team player and a shell of his former self. He was being told to step aside.

With news of his trade to the Indianapolis Colts, the focus is steering towards what didn't work with Carson Wentz, the Eagles, and his years at the top of the Philadelphia sports world.

But if you were to ask Eagles superfan Giovanni Hamilton, there have been plenty of good times with Wentz, especially when it came to off-the-field appearances.

Giovanni to Carson: "You're Still My Hero"

Giovanni has Schwartz-Jampel syndrome, which his mom describes as a cross between dwarfism and muscular dystrophy. He has endured 15 surgeries in his young life.

His latest surgery took place a few days ago. So when he heard the news of Wentz being traded, he was still recovering with his arm in a sling. He said he was having muscle spasms and couldn't sleep well the night before.

But that did not stop Giovanni.

Never one to shy away from giving his thoughts, Giovanni told his social media followers his initial reaction upon hearing Wentz and the Eagles parted ways.

"The news just broke that Carson is gone. This hurts because I can't even put on his jersey right now cause I just had surgery," the 13-year-old said through tears.

just woke up and heard the news

i love u @cj_wentz always ur fan brother 💚 pic.twitter.com/w01Fy7EBYg

He made sure to tell Wentz how he felt in case the former Eagles QB was listening.

"You're still my hero. You always will be," Giovanni said.

Wentz's biggest fan then pointed to a photo of the two of them.

"That moment is what matters," Giovanni said.

That moment Giovanni has referred to as the "Best Day of My Life."

It was on July 26, 2019, when Giovanni visited Eagles Training Camp with his mother.

Wentz walked over to the group of Eagles fans and started signing autographs.

As he approached Giovanni, the boy with bright green spiked hair in a wheelchair was moved to tears.

Watch the emotional meeting between a little Eagles fan and Carson Wentz on July 26, 2019.

First, Wentz signed Giovanni's jersey. Then the 11-year-old reached out for a hug.

The two embraced and then Wentz asked Giovanni a few questions.

"You're my hero," Giovanni replied to the Eagles quarterback.

Wentz gave Giovanni a fist bump and signed a football.

"Thank you," Giovanni said, as Wentz patted his shoulder and walked back to the field.

Giovanni told Action News on that day, "It meant the world to me to finally meet him."

Now that the former franchise QB has flown the coop, Giovanni wanted Wentz to know that this Eagles fan wasn't going to stop having his back.

"Carson, I'm always going to be a fan of you. Forever. Thank you for what you've done. Go Birds," Giovanni said.

He also had some insight for Colts fans.

"Colts fans, you really have a real one," Giovanni said wiping away a tear. "I know what he's capable of with (head coach) Frank Reich; you guys are going to go off next season, I can count on it."

In a positive update Friday, Giovanni was wearing his Carson Wentz No. 11 Eagles jersey. The doctors unwrapped his arm which meant he was able to wear his favorite jersey for "Arm Christmas."

today is arm Christmas bc we unwrapped it from my surgery and saw my dr today. he is happy and so am i, start PT soon and look I got my jersey on!

it is pod day too💚💚 pic.twitter.com/nm0ThjU6Sy

Giovanni Hamilton is not alone in having a special bond with Carson Wentz over the past five years. From the sentimental to the surprising to the silly, Wentz shared many memorable moments with the Philadelphia area and beyond.

Lukas Kusters was a youth football standout and a diehard Eagles fan from Wilmington, Delaware who left a huge impact on Wentz.

Lukas got the nickname "The Dutch Destroyer" thanks to his size and talent on the field.

At 8 years old, the Delaware boy was diagnosed with stomach cancer; it was within days of Carson Wentz being drafted by the Eagles in 2016.

While undergoing a year of chemotherapy and radiation treatments, Lukas' family decorated his hospital room in Eagles green and white and hung Wentz's pro and college jerseys on the walls.

A radiation technician at the hospital shared Lukas' story with the Philadelphia Eagles. Soon after, a video message arrived from Wentz.

"When he saw what it was (Wentz), and when he saw that it was for him -- he just got this smile, just the most beautiful smile on his face, just ear to ear," Lukas' mother, Rebecca Burmeff, said. "Smiled the whole way through it. And then at the end, I think it hit him, this is Carson Wentz -- that took the time out of his day -- to send this message to me. And he just -- he just started to cry. He just started to cry."

As Lukas' illness progressed, he was approached by the Make-A-Wish Foundation and asked what he wanted. His one wish, his mother said, was to thank Wentz for the video he had sent.

So, Lukas met with Wentz. During his visit, Lukas gave Wentz a gray and green rubber bracelet bearing his nickname -- "Dutch Destroyer."

"I wear it in games. I never take it off. And I really never wear bracelets like this, but this one has definitely given me extra motivation -- reminds me of that bigger-picture purpose," Wentz said.

When it was time to go home, Lukas gave Wentz a hug, and as requested, the Eagles QB rubbed his bald head.

"He said it was for good luck," Wentz said. "And I just told him that I'm praying for him, and I just knew it was something that I would never forget. It was a day that started as I thought would be just a simple hang out with this kid, and it went way deeper than that."

Two weeks after the meeting, and four days after his 10th birthday, Lukas Kusters passed away. His family said he was buried wearing the jersey of his favorite player - Carson Wentz.


When the 2017 NFL season began, his mother said she sat down with her family to watch their first Eagles game without Lukas. But to her surprise, Carson Wentz emerged from the tunnel wearing the rubber "Dutch Destroyer" bracelet her son had given him.

"What we see is Lukas' bracelet, right on his wrist," Rebecca said. "It was humbling. And just a proud moment for us -- blown away that he continued to hold onto that and carry that with him."

Rowan is the youngest in the family. The Millers who live in Georgia have five biological daughters and seven adopted special needs children.

Rowan was born with cerebral palsy and cannot speak. But his family said the huge Philadelphia Eagles fan is always full of life.

Through the non-profit The Granted Wish, the Millers reached out to the Eagles to see if Rowan could meet his favorite player, Wentz. The answer was yes and the meeting was on.

When Wentz met with Rowan, the boy had a question for the football star.

Typing out his question on a computer, Rowan asked, "Why No. 11?"

A Georgia family is returning from a surprise trip to Super Bowl 54, all thanks to the Eagles.

Later on, the Eagles presented Rowan and his family with a video.

In the video, Wentz announced the Eagles were sending the Millers to Super Bowl 54 in Miami.

The Millers described their Super Bowl experience as "surreal."

He tweeted out a photo of himself and his teacher shaking hands. Behind them was a whiteboard which read, "Carson Wentz favorite/retweet = No Final. By June 4th."

"Everyone please tag @cj_wentz NO FINAL IF HE RETWEETS BY JUNE 4th," Collin tweeted.

This meant if Collin got Wentz to retweet or favorite his tweet, there would be no final exam for his entire class.

It only took a few hours for Wentz to respond.

He quote tweeted Collin and asked, "Will this do the trick?" along with a fist emoji.

Carson Wentz gets student out of finals. Ducis Rodgers reports during Action News at 6 p.m. on May 31, 2017.

It was no surprise that Collin, who now plays lacrosse for the University of Delaware Blue Hens, was very excited.

"WE DID IT BABY! CARSON YOU'RE THE BEST. GOOD LUCK THIS SEASON #11," Collin tweeted - in all caps, of course.

Philadelphia artist Perry Milou has painted famous and iconic figures, such as Abraham Lincoln, the Statue of Liberty, and Prince, for decades.

His painting of Pope Francis in 2016 led him to be named the official license portrait artist by the World Meeting of Families during the pontiff's visit to America.

But back in June 2017, Milou came to face-to-face with another one of his painting subjects: Carson Wentz.

The artist presented Wentz with his "Faith in Green" oil on canvas portrait of the Eagles QB.

At the time, Milou, like many Eagles fans, were calling Wentz the town's "football savior."

The old adage says to never meet your heroes, but for this Philly artist, he said Wentz lived up to the hype.

"It was a tremendous honor to present him with my painting, but a greater honor in getting to know each other. I am thankful and blessed. Thank you, Carson!" Milou said.

Some of the fun during Wentz's tenure with the Birds came at his expense from Philly fans.

Take for instance, when the royal news came out in November 2017 that Prince Harry and Meghan Markle got engaged.

Some reacted on Twitter asking if it was really Wentz and not Prince Harry who proposed.

The striking resemblance between the two became internet fodder.

Even the Eagles had a little fun with it, tweeting out a picture of Harry while actually promoting an interview with Wentz. The team then sent out a follow-up tweet, "wait a minute...."

"It’s one of those things where every week we just come in ready to work."

The day after the Wentz-to-Colts trade was reported, news came out that Harry and Meghan will not return to royal duties.

"Just woke up to the news that he will not return as a working member of the Royal Family. MAYBE it's because he was traded to the @Colts?" she tweeted.

Just woke up to the news that he will not return as a working member of the Royal Family. MAYBE its because he was traded to the @Colts? pic.twitter.com/qutnU9qiBe