The text message reads: "Free Msg: Your bill is paid for March. Thanks, here's a little gift for you" and includes a link.
WPVI
By TaRhonda Thomas and 6abc Digital Staff 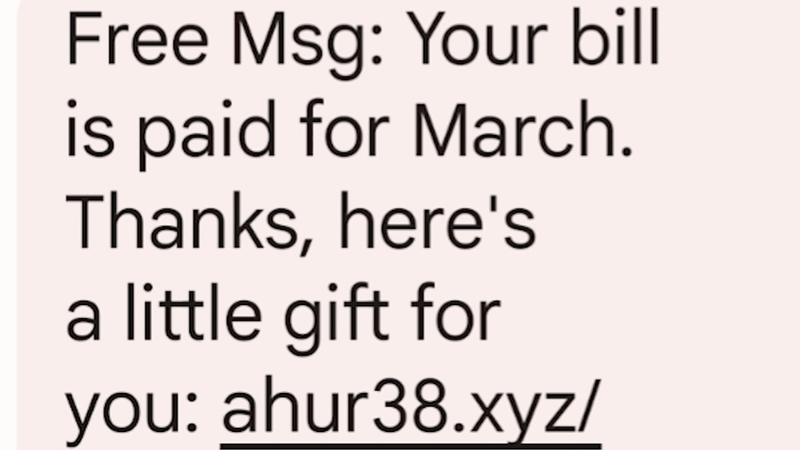 How scammers are using your own phone number to trick you

PHILADELPHIA (WPVI) -- As a producer for Action News, it's literally Ryan Parmer's job to stay in the know.

"Because of where we work, I'm always on alert for these kinds of things," Parmer said of a suspicious text he received on Monday.

At least 10,000 other Verizon customers received the same text message that reads: "Free Msg: Your bill is paid for March. Thanks, here's a little gift for you" and includes a link.

The trick with this scam is that the text is sent from a phone number that appears to be the same number as your own cell phone.

"I get spam messages all the time," said Parmer. "But the fact that this one came from my own number, I was like, 'Wait, is this a legit message from Verizon?'"

It's actually the latest tactic from scammers trying to get you to let your guard down.

Dr. Rob D'Ovidio, a Drexel University associate professor of criminology who specializes in high tech crime, says it's not uncommon to see scammers use phone numbers that appear to come from the same area as their targeted victims.

"This time, they've become a little more crafty and mimicking your number," he said.

D'Ovidio says don't be fooled. The text message is a scam.

"If you didn't send a text to yourself, which you're able to do, (but) if you didn't do it, you know it's coming from some sort of malicious act," he said. "They're phishing for passwords, user IDs."

This new scam goes beyond typical phishing when scammers cast their net wide.

"We actually call it spear phishing," added D'Ovidio. "Verizon is the target. Scammers need to match the brand they're hijacking with customers."

Verizon tells Action News that at least 10,000 of its customers have been targeted. The fact that the text appears to come from their own phone numbers makes some people second-guess blocking the phone number, which is among the recommended tactics when receiving spam texts.

"I'm scared to report it as spam because then I won't be able to text myself my little reminders and stuff like that," said Parmer.

He says anyone who is curious to know whether a text really did come from a company like Verizon can call the company directly.

Customers with other phone carriers have also gotten similar scam messages that appear to come from their own phone numbers.

Some people have clicked on the link, and it directed them to a Russian website.

In a statement to Action News, Verizon said it has no indication of Russian involvement, but the company is working to solve the problem.

D'Ovidio suggests malware scanners for anyone looking to protect their cell phone from scammers. Some scams can direct people to malicious websites that can do what D'Ovidio calls "drive-by hackings."

Malware scanners are available wherever you purchase your apps.

D'Ovidio says, at the very least, make sure your phone's software and apps are updated.

As part of a recent fraud scheme, bad actors have been sending text messages to some Verizon customers, which appear to come from the customers' own number. Our company has significantly curtailed this current activity, but virtually all wireless providers have faced similar fraudulent activity in recent months. We are actively working with others in our industry and with U.S. Law Enforcement as part of an investigation aimed at identifying and stopping these fraudsters and their illegal actions, and we will continue this work on behalf of our customers. We have no indication of any Russian involvement.