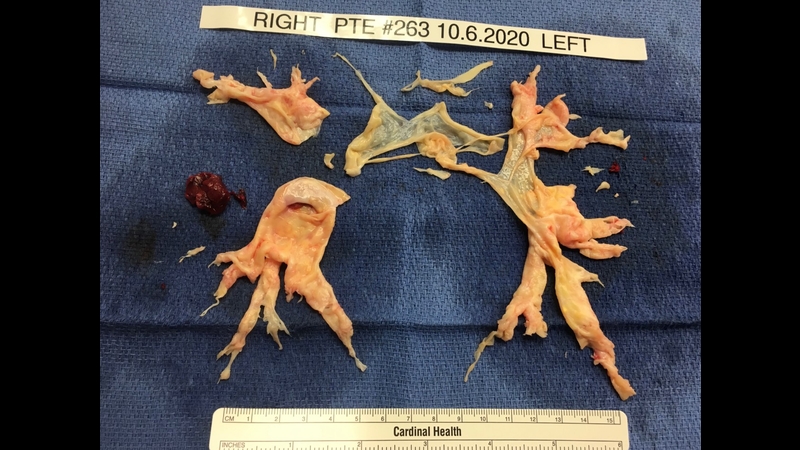 NORTH PHILADELPHIA (WPVI) -- A blood clot in the legs or pelvis is serious enough.

However, it can also lead to another condition that threatens the lungs and heart called CTEPH.

For one CTEPH patient in Washington, D.C., it took a 10-year journey to the right diagosis and specialized treatment in Philadelphia.

William Rosenau is a defense analyst who's worked in the Pentagon, State Department and on Capitol Hill.

After many trips overseas a decade ago, Rosenau developed a major blood clot in his leg.

"Pieces of which had broken off and gone into my lungs," Rosenau recalls.

His doctors in Washington put him on a very expensive drug to control the clots, and blood pressure in his lungs.

"It was outrageous, and it didn't work," Rosenau notes. He never felt "normal."

"It was hard walking upstairs," he notes. And when he went skiing in the Rockies, as he'd done many times before, Rosenau needed emergency oxygen.

He had noticed a wheezing on his podcast, and his brother noted Rosenau's face often looked ashen.

"The term clot is a little of a misnomer because it's more of like scar-like plugs sitting in the, in the blood vessels of the lungs," says Dr. Forfia, who is co-director of Temple's CTEPH center.

Over time, those blockages drive up blood pressure in the lungs and strain the heart.

It was a miracle Rosenau was as active as he was.

"For years, I had been operating on less than one lung," he notes.

"CTEPH is significantly underdiagnosed," says Dr. Forfia, adding, "It's not a diagnosis that's often on the mind of many physicians out there.

Dr. Forfia says medication or balloon angioplasty, like what's done in the heart. work for some patients.

But surgery to remove the blockages is the most effective - and frequent - treatment.

Rosenau's surgery lasted six hours, and during that time, a massive amount of scar tissue was removed.

"I literally felt better the next day. I could tell the difference," he says, amazed.

He spent five days in the hospital before returning to Washington to recover.

Now, he can keep up with his very active dog, or speed down a ski slope, always thankful he took Dr. Gomberg's advice to come to Temple.

"This treatment was life-changing for me. Absolutely.

And in the eight years of its CTEPH center, Temple has treated more than 300 patients from all over the country.
Report a correction or typo
Related topics:
health & fitnesshealthmoves in medicine temple
Sponsored Content
Copyright © 2022 WPVI-TV. All Rights Reserved.
MOVES IN MEDICINE TEMPLE
SPONSORED: "Spray-on skin" heals major burns in two-thirds less time
Non-Alcoholic Fatty Liver - a very common disorder lacking awareness
SPONSORED: Caring for the whole patient - and beyond - after burn injuries
SPONSORED: Asthma in adults: Triggers, symptoms, diagnosis and treatment