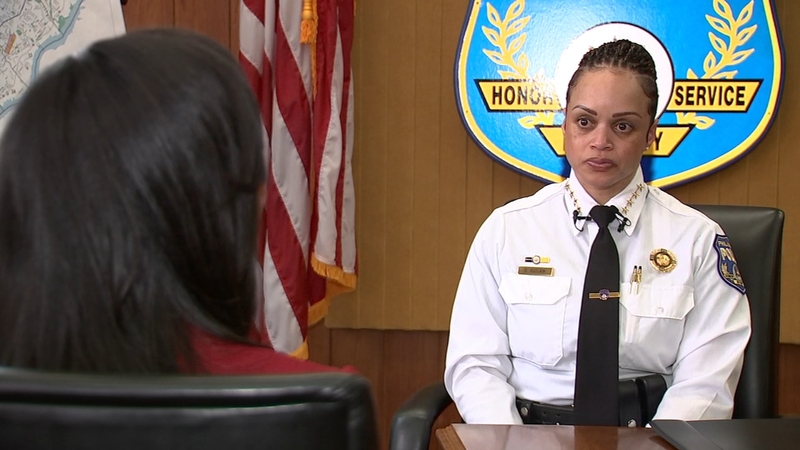 Those are the words of new Philadelphia Police Commissioner, Danielle Outlaw.

Action News anchor Sharrie Williams sat down with Outlaw on Wednesday, the commissioners third day on the job.

Outlaw said she already knows the pressing issues in the department and in the city.

Sharrie asked the commissioner, "For some in this community, surviving is a daily grind. The gun violence is at a level that, quite frankly, is not acceptable and people are living in fear. There are certain parts of this city where residents don't feel safe. But they're also tired of city leaders talking. Will you talk about the action you will take, what we will see immediately?"

"I appreciate that because I am a doer. It gets frustrating when we go to meeting after meeting and you hear the same 'what if we did this, what if we do that?' I'm a firm believer in at some point we have to try it, whether it's a pilot or just getting out there and taking risks," Outlaw said.

"As a leader it's important to encourage innovation and let people know it's okay to make a mistake. The problem is the stakes are really high for us and we're talking about human lives," said Outlaw.

Commissioner Outlaw talked about earning trust from the community, especially communities of color, and the importance of officers and residents to see each other as human beings.

A big task will be building her executive team to help implement her vision. It's important, she says, to put the right people in place.
"I've learned over time if I don't have the people to implement these strategies it's all a moot point. I have to take care of my people. There are a lot of really good, intelligent, strong people who are committed to their community who just need to be put in a position of influence or be given more responsibility," Outlaw said.

Her first directive was to lift the ban on nail polish. That came as a surprise to some, but the meaning behind the change speaks to a bigger issue: inclusion and support for the nearly 25 percent of women who make up the force.

"It wasn't even on my radar. It's oftentimes those little things I would've never known about and probably would not have gotten addressed had I not met face-to-face with people. Something so small really had a large, positive impact. I got so much feedback from the women," Outlaw said.

Sharrie Williams reports on her conversation with Commissoiner Outlaw during Action News at 5pm.

"This the first time I've worn a woman's uniform. My uniforms for my entire career have been men's shirts, men's pants - the tie is what it is - but it's tradition. This is the first time. We don't tend to think about things like that and it's the small things that allow us to feel not only welcome but supported," Outlaw said.

The commissioner made it clear she's a resident here now. She said she's a mother first and said she wants her community to be safe just like everyone else.