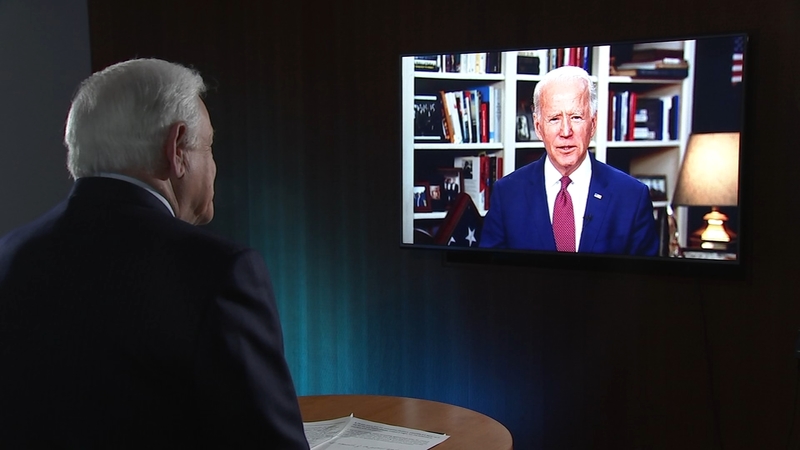 PHILADELPHIA -- President Donald Trump said he had a "really wonderful, warm conversation" with Joe Biden on Monday about the coronavirus outbreak.

"He gave me his point of view, and I fully understood that, and we just had a very friendly conversation," Trump said at his daily press briefing.

Biden, who is quarantining in Delaware, spoke with 6abc on Tuesday about that phone call and the coronavirus plaguing the nation.

"He asked my views. I gave him four things that I thought were of urgent need that he should be doing, that they should be doing, the national government. And we both agreed we wouldn't go into detail but we did acknowledge that we talked to one another and that if I had more suggestions, or if he wanted to call me, he could," Biden told 6abc's Jim Gardner during a one-on-one-interview.

"The president has said, and we've heard these words a number of times, he has said we inherited an obsolete broken system that was not meant for anything like this. What's your reaction to those words?" Gardner asked Biden.

Biden says warnings were made.

"When we left office, we warned them that a pandemic was something as a greatest concern. We had set up within the president's office, a pandemic office. All the way back in January the 17th I wrote an article saying it's coming. We should be doing something about it. But here's the point. The president didn't cause this virus, but he reacted incredibly too slowly to it and didn't acknowledge it's a federal responsibility," said Biden.

The former vice president said despite the pandemic, his numbers are up.

"Based on the polling data, it's helped me. The more he speaks, the more my numbers go up. I'm not being facetious," said Biden.

According to Biden, this public health crisis will have surprising consequences, including a catalyst for a better world.