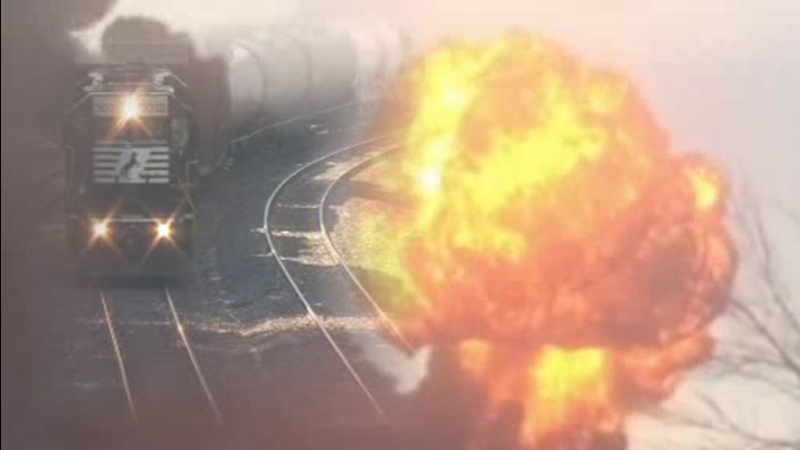 PHILADELPHIA (WPVI) -- Action News is investigating the transportation of a highly flammable and hazardous chemical that is being shipped right through the center of Philadelphia.

It's called Bakken oil. It's a form of crude oil.

Action News is uncovering into the routes it's traveling right through your neighborhoods and whether enough is being done to keep you safe.

This is a topic few emergency responders want to talk about. More than a handful of local departments, including the City of Philadelphia and several municipalities in New Jersey, declined our requests for an interview.

But our cameras caught this potentially dangerous material being transported right along the Schuylkill though densely populated neighborhoods and into New Jersey.

"The biggest problem with Bakken crude is of course its flammability," Matt Fitzgerald, emergency response specialist with the New Jersey State Police, said.

Rail safety and security consultant Fred Millar warns there is no way for emergency responders to be prepared if the worst case scenario were to happen here in Philadelphia.

"Everybody should be extremely worried. In fact, there is no effective emergency response to a crude oil derailment," Millar said.

In July 2013, 47 people were killed when a train loaded with Bakken crude ran off the tracks, exploded, and burned down half of a town in Quebec.

There have also been crude oil explosions in North Dakota and another one in Virginia.

Fortunately, there were no injuries and no oil was spilled in those incidents.

"I think we've been certainly very fortunate in the whole scheme of things that we've not had any significant accidents or tragedies," Mayor Michael Nutter said.

But the question is did Philadelphia just dodge a massive bomb-like catastrophe with the latest derailments here?

Action News found those trains traveling day and night, and across multiple sections of the city; some trains so close we or anyone else could access them.

In Camden, the trains can be found near a playground.

And in Philadelphia, trains are right along the Schuylkill Trail.

Most residents we spoke with had no idea something so toxic is being transported right in their own backyard.

"It's a mystery, I don't know what kind of chemicals they have," Ivan Drufoaa said.

The New Jersey State Police invited Action News to a training drill, one of many happening across the region.

"You have to look at what's happening in different parts of the country and realizing some of that stuff might eventually happen here and what lessons we've learned from those incidents," Fitzgerald said.

Local, state, and federal agencies tell Action News they are preparing for the possibility of a chemical fire, but no one was willing to tell us just how bad a scenario it could be.

"It would be hard to say for this one situation. It could be one mile, two miles, three miles," Dave Wright of the EPA said.

The National Transportation Safety Board estimates crude oil shipments have increased 40-fold since 2005. Critics are demanding safer tanker cars, railroads, and for more information to be released to the public.

But Millar warns the regulations are moving slower than the pace of America's crude oil boom.

"American citizens are being kept at enormous risk," Millar said.

"I can't predict the future and neither can you. So you do the best you can under the circumstances," Nutter told Action News.

Some public officials in other areas have pressed for the CSX and Norfolk Southern to re-route their trains around major cities, but Mayor Nutter has not requested that here.

It should be noted, this is a multi-billion dollar industry and so it's a balancing act between safety and the desire for the US to be self-sufficient when it comes to oil production.

Thanks for allowing CSX to comment on this important subject.

Safety is CSX's highest priority and we're sensitive to the concerns that residents of the communities where we operate may have about the materials that we move. Our goal is zero accidents and we strive to achieve that goal every day through appropriate training of our crews, investment in our infrastructure, compliance with all Federal safety regulations that govern the movement of hazardous materials and communication with first-responder organizations along the routes we use.

Security & Incident Response
CSX has a full-time team of professionals trained in the management of hazardous materials as well as the safe response to incidents involving hazardous materials. CSX also has its own staff of environmental, industrial hygiene and medical professionals who provide assistance during hazmat incidents. In addition, CSX maintains a network of hazmat response contractors and environmental consultants who are strategically located throughout its 23-state network and on-call around-the-clock. These professionals work with the first responders along our routes to help ensure that the agencies who are charged with protecting the public's safety have the information they need to be prepared to respond to an incident and that, in the event of an incident, they receive the on-scene support they need to be effective.

Cars per train/number of trains
Crude oil shipments often move in what we refer to as 'unit trains,' which consists entirely of one type of freight. Crude oil unit trains typically have approx. 100 cars. As required by a May 7, 2014, US Department of Transportation order, CSX reported the estimated weekly number of trains carrying 1 million gallons or more of Bakken crude oil to the states that they travel through, along with the routes those trains take. Currently an average of 3 crude-oil trains per day move across the CSX network (not just through the Philadelphia area, but across the entire network).

Routing
Movements of hazardous materials are routed in accordance with the Rail Corridor Risk Management System, an analytical tool developed in coordination with the federal government, including the U.S. Department of Homeland Security (DHS), PHMSA and FRA that takes into account 27 factors about potential routes. The tool focuses on the safety and security of the communities through which the trains travel, our employees and the freight. Factors weighted in selecting routes include volume of commodity, trip length, population density along the route, local emergency response capability, track quality and signal systems - to assess the safety and security of rail routes. This tool is used to route crude oil trains, to select the safest and most secure to deliver the train to its intended destination.

As an aside, it's important to understand that railroads are obligated to carry any freight that is consigned to us in containers that meet Federal requirements for the transportation of the contents, including crude oil. This is known as railroads' "common carrier" obligation.

Coordination with First Responders
CSX works closely with local officials and first responders to share important information about the contents of trains traveling through their communities. For security reasons, CSX does not disclose specific shipment information to the public. However, CSX does make this information available to public safety officials and first responders in several ways. For example, community first responders can request hazardous-materials density studies that show the volumes of hazardous materials that move through their areas. Our Community Emergency Response Guide, which we periodically send out to fire departments and other first responders over our entire system, includes planning tips for responding organizations and has long listed the top hazardous materials commodities transported by U.S. railroads and those transported by CSX.

CSX also invests each year in training for first responders to prepare them to handle any rail-related incident. CSX's training reaches more than 7,000 first responders each year through hands-on sessions, classroom training at local fire stations, exercises and table-top drills, web-based and self-study training courses. The hands-on and classroom safety training helps strengthen CSX's partnership with first responders and provide a higher level of emergency readiness. For example, in the last six months we have completed the training of approximate 2,000 first responders in more than 325 organizations through our "Safety Train: Energy Preparedness Program," which covers hazardous materials response and information about crude oil specifically. This year the Safety Train kicked off in Philadelphia in May, and visited 17 other cities along our routes. More details are available here: http://tinyurl.com/pn9pg7h

CSX also sponsored 92 firefighters to attend a special 3-day training program focused on crude-by-rail incident response at the Security and Emergency Response Training Center (SERTC) in Pueblo, Colorado. The training focused on preparation for and emergency response to railroad incidents involving crude oil, and included an overview of the history of crude oil extraction, chemical and physical properties of different types of crude oil currently being transported, incident site and damage assessment, and tank car design and construction. Representatives from the Philadelphia Fire Department, the Montgomery County Hazardous Materials Team and the Trevose Fire Department in Pennsylvania all attended. More information is available here: http://tinyurl.com/mcadcot

In addition, CSX recently announced the availability of the rail industry's first mobile app that first responders can use to securely access information about hazardous materials being transported by any individual CSX train. Called CSX Operation Respond, the app gives first responders access to critical information while they are en route or on the scene of an incident involving a CSX train. More information about the app is here: http://tinyurl.com/ovvunfx

The United States is moving toward greater energy independence, and Norfolk Southern provides the keystone in a transportation network critical to this movement. Our customers and this country demand that we haul all products, including crude oil, safely on a dependable infrastructure, and that's a responsibility we must live up to every day.

This is a safe way to transport products, and like the airline and automobile industries, we're working to make it an even safer mode of transportation.

And safety doesn't just make good business sense; it's personal. We employ more than 5,000 people in Pennsylvania, and they and their families live, work and recreate in the same communities as everyone else. NS has plenty of business and personal incentive to make safety its highest priority.

99.998 percent of all hazardous materials on the nation's rail network arrive at their destination without release from an accident.

NS has common carrier status. That means we have no choice - if a customer gives us a tank car of hazardous material that meets current regulation, we must haul it on our rail network.

NS entered into a Feb. 21 voluntary safety initiative with the U.S. Department of Transportation related to crude-oil-by-rail (https://www.aar.org/newsandevents/Press-Releases/Pages/Freight-Railroads-Join-U-S-Transportation-Secretary-Foxx-in-Announcing-Industry-Crude-By-Rail-Safety-Initiative.aspx).

NS has participated in 2014 in a number of drills and trainings with first responders in the Philadelphia region. These include a tabletop exercise with SEPTA, hands-on tank car training in Eddystone, Pa., and sponsoring members of the Philadelphia Fire Dept., Gloucester County EMA (NJ), Chester County HazMat, Eddystone Fire Co., and the Montgomery County Public Safety Department to attend training at the Safety and Emergency Response Training Center (SERTC) in Pueblo, Col. this summer.