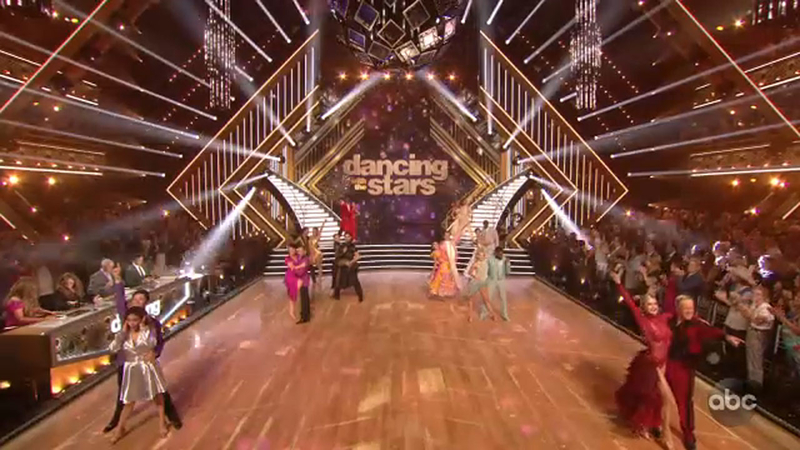 'Dancing with the Stars': Dance-by-dance recap

LOS ANGELES -- It's another week of competition as the 10 remaining couples competed on Week Four of "Dancing with the Stars."

A guest judge stepped in to offer another opinion at the judges table: former contestant Leah Remini.

Lauren Alaina: 32 out of 40
The country singer was over the moon to find out she would be dancing the Foxtrot to a tune by her all-time favorite artist, Dolly Parton. She and Gleb took a quick trip back to Nashville, where she ran into her good friend and last year's champ Bobby Bones. Even with a busy schedule and a family emergency, Lauren pulled off a lovely and lyrical routine. Head judge Len Goodman called it accomplished and nice; Bruno Tonioli thought she was classy and elegant; Carrie Ann Inaba told Lauren she has arrived; and Leah felt moved by the story told with the dance.

Ally Brooke: 32 out of 40
Last week she topped the leader board, so Ally knew she had to go the extra mile to try and hang on to that top spot with the judges. Her pro partner Sasha put her through a "boot camp" to help her with her cardio since they had to do the jive. Their song was "Proud Mary" and Len told Ally he felt proud after watching her dance. Bruno called it a "diva jive" and thought Ally commanded the stage from the get-go.

Hannah Brown: 32 out of 40
The always smiling former "Bachelorette" had the tough task of not smiling this week since her routine was the Paso Doble, a dance of power and passion. She kept smiling and laughing in rehearsal so Alan took her on a field trip to a "rage room." Hannah got to take out all kinds of aggression and break a lot of stuff. She channeled that power on the dance floor, with Len calling the routine aggressive but still calm and controlled. Bruno pronounced that the sexy beast had been released and Carrie Ann thought the dance was passionate and delightful.

Kel Mitchell: 32 out of 40
Witney knows she needed to unlock something to bring out a little more spirit in Kel on the dance floor. She invited his adorable family to rehearsal and their energy gave him a great lift. Their Cha got everyone in the ballroom on their feet, and that included Carrie Ann. She clapped and danced and told Kel this is what she's been waiting to see. Leah and Bruno both encouraged Kel to believe he is a good dancer and to continue to show his personality.

Sailor Brinkley-Cook: 31 out of 40
Sailor's confidence level continues to rise. She had some help this week with a visit from former DWTS champ, and Sailor's childhood friend, Rumer Willis, who let her know she's on the right track. Val choreographs a Cha to "Ain't No Mountain High Enough" and the judges are pleased. They all praised her execution, effort and the shining light she brings to the ballroom.

James Van Der Beek: 28 out of 40
James and his family share some great news: they are pregnant with their sixth child. His routine with Emma this week was a quickstep and the song is "Walking on Sunshine." As Emma said, a joyous dance, a joyous song, to celebrate joyous news. Len thinks James is a terrific dancer but wanted to see more of the dance "in hold." Bruno praised his storytelling abilities but warned James to watch the little details. Carrie Ann wanted the couple to find a middle ground as far as energy; she thought they were a bit out of sync. Leah called the routine solid, and told James he's been amazing from day one.

Karamo: 28 out of 40
The TV host is determined to get more than a "5" out of Len this week. He and Jenna have a Tango to the country hit "Old Town Road." They have a visit to a horse stable that is supposed to tie-in to training for the Tango but it fell flat. Luckily, they had better luck in the rehearsal studio. Bruno applauded the dance, and Karamo's focus this week. Carrie Ann said this is the favorite dance Karamo has done so far this season; however, she took off a point because there was a lift. Len knit picked a bit, about elbows and some footwork, but ended up giving Karamo the highest score he has to date.

Kate Flannery: 26 out of 40
Kate was over the moon after last week's high score and wants to keep pushing. Pasha needs to teach her the moves for the Argentine Tango, but also the character. The dance needs to be hot and steamy. Kate said she just didn't want to look like the mother of the bride. Leah praised her energy and Carrie Ann liked the way she used the dance floor. But Len thought she struggled with her character, and Bruno noted she lost her balance a few times.

Sean Spicer: 21 out of 40
Sean and Lindsay attacked the Paso Doble this week. She hoped his military background might help with this type of dance. Len said that technically the dance wasn't great, but he liked that Sean didn't seem scared of the challenge. Bruno agreed that Sean's not quite there yet as far as technique, and advised him to work on his core. Carrie Ann loved what he was able to do with his arms; and Leah praised Sean for coming out committed and always trying his best.

Lamar Odom: 20 out of 40
Lamar admits he still struggles to remember the routines. Peta's patience is getting him through. She also surprised him with a visit from his two kids and that boosted his spirits. They were assigned the Viennese Waltz, which needs a sensitive touch. Carrie Ann thought Lamar showed the appropriate vulnerability, and admired his courage. Leah was brought to tears, because she knows just how hard dancing can be.

That means Karamo and Lamar were in the bottom two. Carrie Ann votes to save Karamo. Bruno agrees. So Lamar is sent home.