Another round of storms causes damage, power outages throughout Delaware Valley 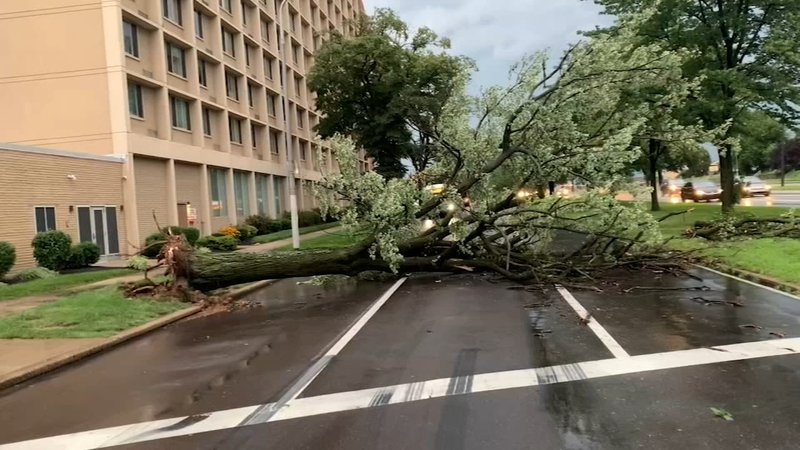 BRISTOL TWP., Pennsylvania (WPVI) -- You could hear it from a mile away. Mother Nature was coming back for another round.

"Horrible, horrible," said Eric Hogarth of Bristol, Bucks County. "I mean, if it floods again, it would just, I don't know what to do honestly."

A line of storms barreled through the Delaware Valley, knocking down trees along Roosevelt Boulevard in Philadelphia and throughout Jenkintown, Montgomery County. A tree came down in front of Rydall Elementary School on Huntingdon Pike in Huntingdon Valley, Pa.

"It's crazy; it's waking my kids up," a neighbor said. "It sounded like gunshots at first."

RELATED: Wobble in moon's orbit to bring surge in flooding to most US coastlines in 2030s: NASA study

Strikes of lightning put on a show and lit up the sky for hours.


Hogarth said he got 3.5 feet of raw sewage and water in his basement when flash floods inundated Bucks County on Monday.

"Both of my sump pumps malfunctioned, so right now, if we get two to three inches, it could back up to the basement again," he said.
Earlier in the day, homeowners along Snowden Avenue continued to clean out their belongings after flash floods ripped through Bucks County on Monday. The last thing they want is more water.

"Hey, you never know now after you saw what it did and how quickly, you don't know what to think," said Bill Heil of Bristol. "I mean, I just hope that everything that everybody did with all the neighbors doesn't go to waste."

This upcoming week on Tuesday and Wednesday, Bucks County residents are encouraged to go to Keystone Elementary where different county agencies can help those affected by the storms.

"We have to prove that this is beyond the capabilities of the local community and the state to be able to respond," said Jeff Thomas, executive deputy director of PEMA. "That is what FEMA tells us."