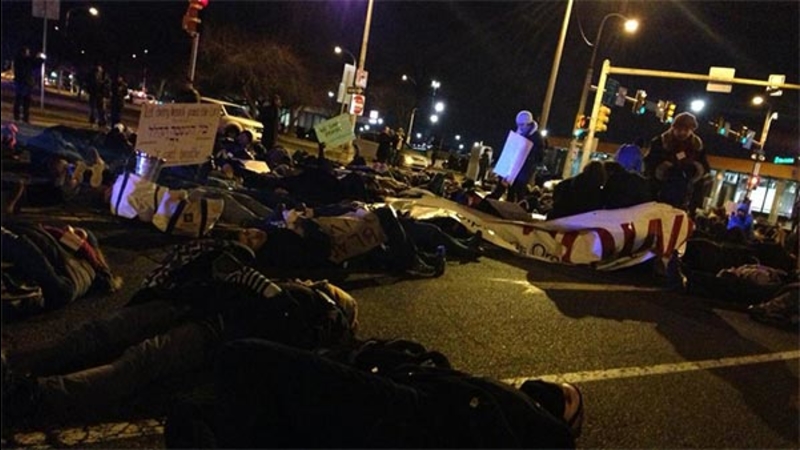 SOUTH PHILADELPHIA (WPVI) -- Local demonstrators once again called for justice for Michael Brown and Eric Garner by holding a protest and 'die in' outside Lincoln Financial Field after the Eagles game.

Even before the Eagles vs. Seahawks game ended, POWER clergy leaders and members of their congregations convened at the intersection at Broad Street and Pattison Avenue.

The protesters laid in the street for a total of four minutes and 30 seconds to represent the four hours and 30 minutes that Michael Brown laid lifeless in the streets of Ferguson, Mo.

"Any venue is a good venue quite frankly. All that we are trying to do is to keep the awareness alive, keep awareness for the injustices - systemic injustice across the country," said Rev. Nicholas O'Rourke, Living Water United Church of Christ.

"This is not just a black issue, this is an issue for all Americans," said Rabbi Eli Freedman.

Outrage also over a New York grand jury's decision not to indict a police officer for the chokehold that killed Eric Garner was also part of their message.

Philadelphia police officers were on hand to respect the first amendment and keep the peace. The demonstration ended with no arrests.

"We were definitely prepared, and in large part, because they helped us out. To be fair they let us know they were coming, so kudos to them for that," said Deputy Commissioner Richard Ross.

Eagles' fans yelled their thoughts as police shut down the intersection for nearly a half hour.

It's estimated that more than 60,000 fans were leaving the game.

"They have the right to protest but to cause a disturbance like this when people are trying to get home to their families and their kids - I think they can protest on the street but why block the highways," said Mike McGraw.

"To me - I don't care. It's their legal right, they can do what they want, I just want to get home," said Jason Downey.

There have been a number of similar scenes locally and across the country last week including at 30th Street Station and Temple University.

The protest was the second of two serious events surrounding the game, as family members of Shane Montgomery and volunteers handed out flyers to tailgaters to help find the missing West Chester University student.