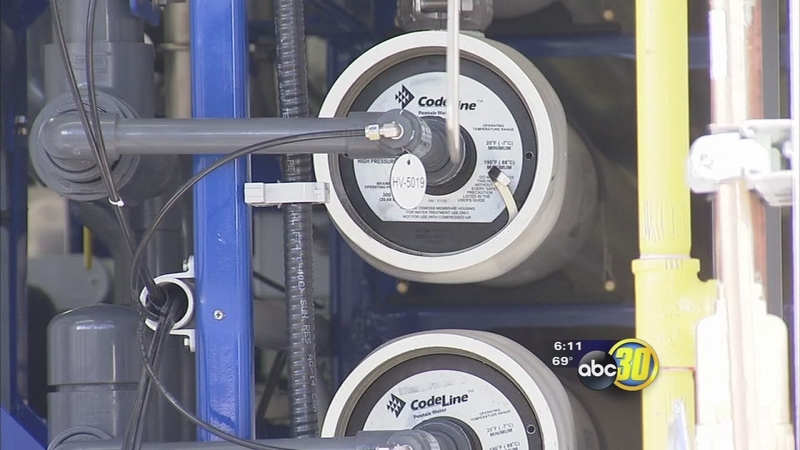 CAMBRIA, Calif. -- The drought has created crisis conditions for many areas across the state of California. But now one community has found its own unique solution for a reliable water supply.

The central coast community of Cambria is a vacation destination for many Valley families. And now it's also home to a facility some see as a model for dealing with the drought.

Cambria Community Services District Board President Gail Robinette said, "What you're seeing out here is essentially history in the making."

The Cambria Community Services District started operating an emergency water supply project last month -- after completing the entire process, from permits to construction in less than a year. Critics say it happened too fast for proper environmental reviews and isn't really necessary, but district leaders disagree.

Cambria Community Services District General Manager Jerry Gruber said, "By putting this project into operation, we never have to worry about running out of water again."

The facility treats brackish water -- a mix of mostly salty groundwater plus some fresh water and treated wastewater. It's pumped in through a well before swirling through a three step process that cleans the water to meet strict state standards.

The water goes through filters to remove solids before moving on to the desalination system. The salt is removed through reverse osmosis inside a modified shipping container -- before ultraviolet light and hydrogen peroxide disinfect the water and destroy any remaining chemicals. Leftover brine is pumped to a holding pond where large blowers help it evaporate. And the treated water goes back into the ground.

Gruber said, "It has about a two month travel time and at that point we'll be taking it out of the ground and drinking it for human consumption here in town."

Right now the plant is operating under an emergency permit during limited hours, but the district is working to make it a permanent option. Gruber said it's also gaining national attention as a possibility for other communities, and could even work for the Valley because it doesn't require ocean water.

"You could also use it for some of the groundwater that's contaminated by high nitrates and pesticides and things like that," added Gruber.

Rogers explained, "The problem right now would be the cost of that, but I think you come to a point in which you do something that's very expensive and have water or not survive."

The price of the project is about $9.5 million. It was funded through a bank loan, and the district is now set to receive a more than $4 million state grant. Residents will also pay slightly higher water bills, but they strongly supported the plan after cutting their own usage by about 40 percent to get through critical times.

Gail Robinette added, "We went the extra mile because we didn't want to find ourselves out of water."

Board President Gail Robinette is originally from Fresno and hopes the work done here could also help her hometown.