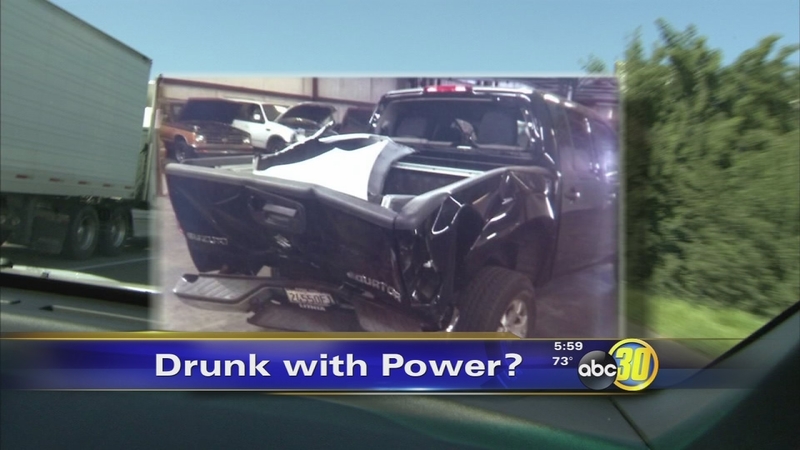 FRESNO, Calif. -- A drunk driving collision caused major damage, but the first badge on the scene was the one carried by the drunk driver who caused the accident.

A Fresno man on his way home from work was the victim in that crash. The drunk driver was a Bay Area probation officer.

There's no dispute over whose fault the collision was. Contra Costa County probation officer Jesse Aguilar has already been convicted of DUI. But at the time of the crash, his victim says Aguilar used his badge to try and turn the tables.

The mangled tailgate on Eustaquio Flores' pickup wasn't his only memento from a September 2013 crash. The front fender of the Camry that hit him wedged in his truck bed, complete with the California exempt license plate of a Contra Costa County probation vehicle. Flores says the probation officer flashed his badge and launched into accusations.

"He asked me if I was drinking, so I take off the lid of my cup and show him I wasn't drinking - the beverage inside the cup wasn't alcohol," Flores said. "And I was pretty upset at that time so I asked him 'What are you drinking? You're the one who hit me.'"

Flores had just left work and a CHP collision report shows he was driving 65 miles an hour, headed north on Highway 99. It was almost 4 a.m., so traffic wasn't quite this heavy, but a couple other drivers did stop to help.

CHP officers eventually figured out Flores was sober, but Jesse Aguilar was not. His blood alcohol content tested at .14 and he's since been convicted of misdemeanor DUI. But Contra Costa County owned the car and so far, they've refused to pay for Flores' medical expenses.

"It's unfortunate and it's disappointing," said Flores' attorney John Waterman. "Their current response and their position right now is that they have no liability."

John Waterman says Aguilar was in Fresno on county business, in a county car, and he's the county's responsibility. ABC30 legal analyst Tony Capozzi says, if he was sent here for work, the county should pay. But they may try to claim what he did happened way off the clock.

"What the implication is is that he's driving the car at 3 o'clock in the morning," Capozzi said. "That's not part of his business. That's not within the scope of his employment."

An MRI showed Flores may have suffered back and nerve damage in the crash. A Contra Costa County public information officer told us the county doesn't comment on pending litigation, but she did confirm that Aguilar is no longer employed by the county.