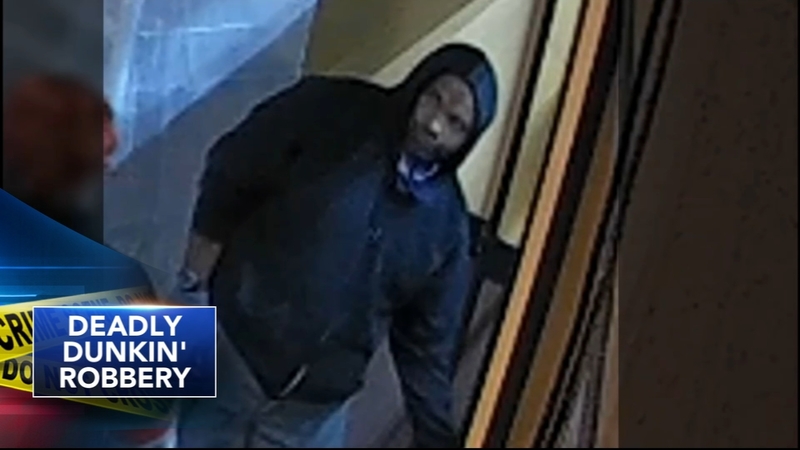 PHILADELPHIA (WPVI) -- Philadelphia police are searching for the suspect who gunned down a Dunkin' store manager in North Philadelphia.

The incident happened Saturday around 5:30 a.m. on the 500 block of W. Lehigh Avenue.

Police say the store manager, Christine Lugo, 41, was opening the shop when she was approached by an armed man and forced into the business.

Once inside, the suspect demanded she hand over money from the store office. After taking the money, the suspect shot Lugo in the head. She was pronounced dead at the scene.

RIP 40 year old Christine Lugo, who was killed during an armed robbery at the Dunkin on 5th and Lehigh Saturday morning. Police say she was opening the store when the suspect demanded she handed over money. When he did, he shot her @6abc pic.twitter.com/iqcBsqokOU

Co-workers, friends, and family gathered for a memorial Saturday afternoon outside the store.

The suspect remains at large, and anyone with information is asked to contact police.

Officials want the public to look closely at the surveillance video from inside the store.

The suspect police are looking for is a Black man, believed to be in his late 30s to early 40s, with a mustache and goatee and a medium-to-stocky build.

The victim's friends are left mourning the woman they say was a mother of two, grandmother, and tireless worker.

"She was a special person," said Gilberto Melendez, who used to work with the victim. "It's crazy that somebody can just come and take somebody's life like it's nothing."

A $20,000 reward is being offered for information leading to an arrest and conviction of the person involved.

"We are aware of the tragic incident that occurred at the Dunkin' restaurant on Lehigh Street in Philadelphia. All of us at Dunkin' are saddened to learn of the death of a restaurant manager, and our thoughts go out to her family and friends. The franchise owner is cooperating fully with the local authorities in their investigation. As this is an active police investigation, we defer any further comment to the Philadelphia Police Department."