Grocery store hosts veteran who got hateful note on car

Rod Boyle, center, a veteran who received a nasty note while he was at the grocery store, was invited back to that store for an apology.

WAKE FOREST, North Carolina (WPVI) -- A veteran who received a nasty note while he was at the grocery store, was invited back to that store for an apology.

On Sunday, ABC11 was the first to introduce you to Rod Boyle. Boyle served in the U.S. Navy and he shops at the Harris Teeter in Creedmoor Village in Wake Forest.

As a veteran he parked in the parking spot the store reserves for veterans. When Boyle came out to his car he found a nasty note.

The person who left the note apparently didn't think Boyle fit the mold of whatever a veteran should look like or what car he should drive.

Boyle informed the management just to make them aware. He never imagined they would invite him back to thank him for his service, give him a cake and $100 in gift cards.

"On behalf of Harris Teeter I know we're happy to have you as a customer and protecting the country for us," Roy Bunn, store manager, told Boyle on Thursday evening. "For the incident, we deeply apologize for that."

"Harris Teeter did nothing wrong. Harris Teeter offered me and every other veteran a parking spot," Boyle told him.

Since Sunday, Boyle's story has been circulating around the country and resonating with many veterans.

Dave Johnson is also a store manager at the Harris Teeter and he is also a veteran.

"I've experienced the same thing you have," Johnson told Boyle, "and it's real unpleasant."

While Harris Teeter and its management did nothing wrong, it prides itself on being a champion for veterans. They have many veterans working in the company and starting on May 1, it launched its annual Support Our Troops donation campaign, which benefits the USO.

Chris Froschner with the North Carolina USO was also at the Harris Teeter on Thursday to meet Boyle and to help spread his story.

"This is a great opportunity to educate the public," said Froschner.

They want to remind people that it's not a rule for every veteran to mark their car as veteran-owned or to wear some type of label.

"America allowed me to join the military and protect and serve this country. This person who wrote this note on my car was given that right to be able to do that because of what I did," said Boyle. "Why doesn't that person go up to the person that's coming out of the car and say thank you? I mean, it's as easy as that, that's part of the purpose of the parking spot I think is to allow people to know who the veterans are." 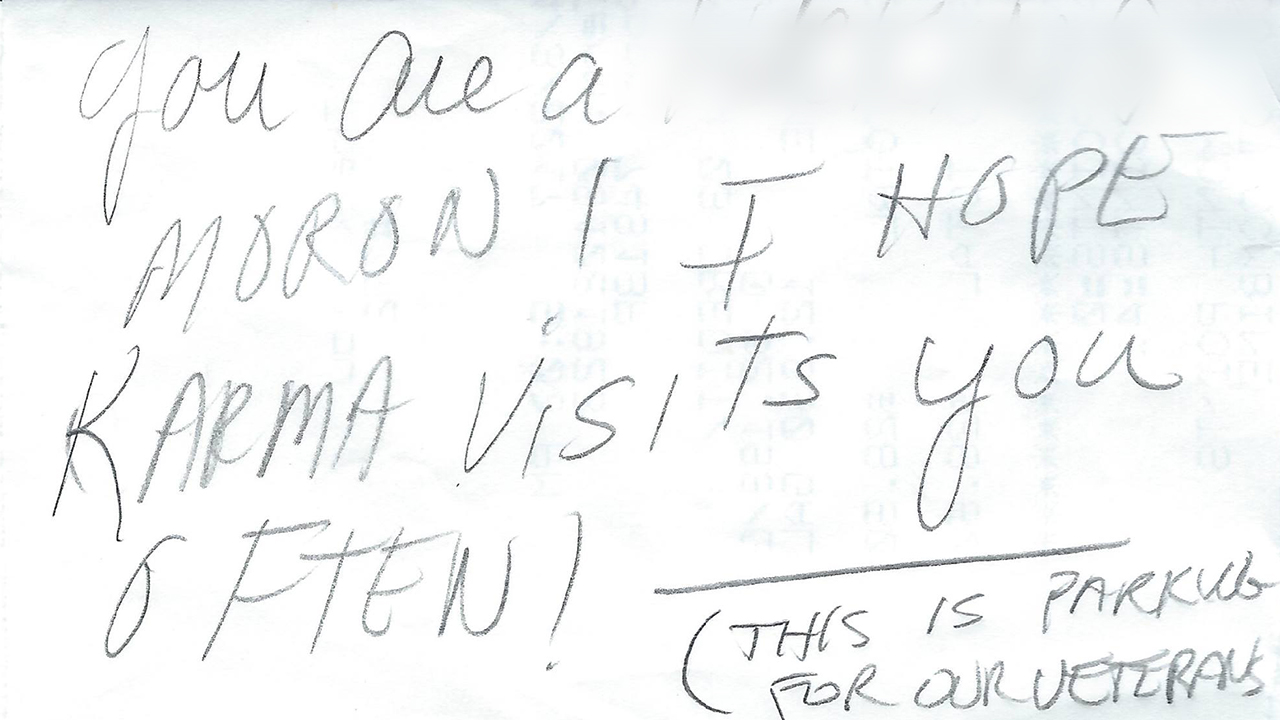