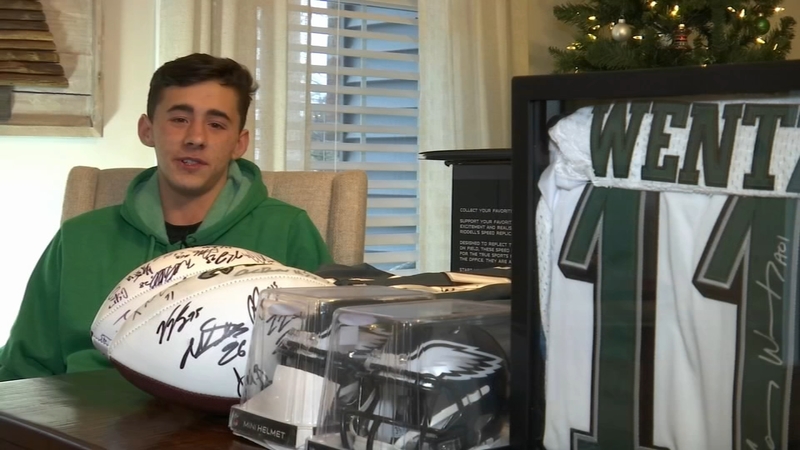 You've probably never heard of 18 year old Will Helms, but pretty much every player on the Eagles has, and he has the collection to prove it.

From jerseys to Super Bowl helmets, the teenager has autographs from pretty much any Eagle you can name.

He has a method for how to meet his favorite players.

"2017 in the NFL draft, Carson Wentz was doing an interview and I wanted to meet him, I never met him first, so I chased his car down, like blocks, almost to the highway," said Helms.

He said it all started a few years before that when he would ask his mom to drive him to the Nova Care Complex every single day - regardless of the weather. He said he would wait outside for hours at a time and start cheering when his favorite players drove by.

"Sometimes I got at two in the morning. It doesn't matter. The other day, a couple weeks ago when they were on that losing streak, I went to the airport and I was the only one there in the pouring rain," he said. "They pulled over the other day they were like, 'what are you doing dude, it's like 5 degrees down here' and I was like, have to support you guys. They were all nice as can be. They're like, 'you're crazy.'"

Crazy or not, he says he supports the team through the highs and the lows and thinks they have a shot to make a playoff run this year.