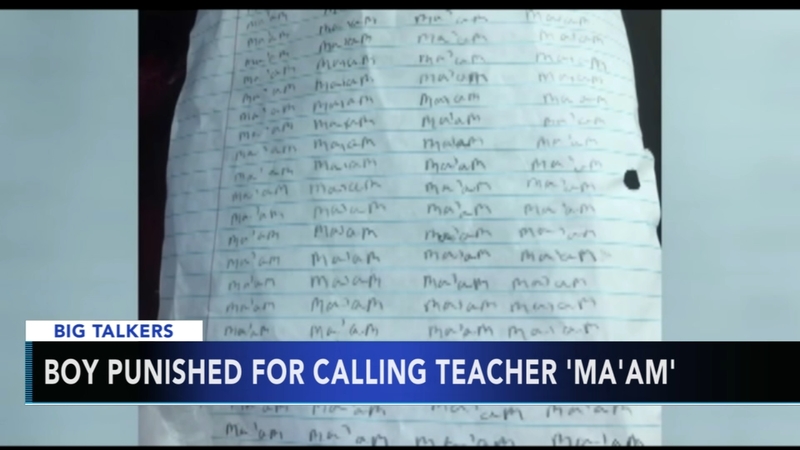 TARBORO, N.C. (WPVI) -- Parents of a fifth grader in North Carolina are concerned after their child was punished for referring to his teacher as "ma'am."

WTVD-TV reports, Teretha Wilson said she noticed something was wrong Tuesday when her 10-year old son Tamarion got off the school bus from North East Carolina Preparatory School.

"I asked him what happened. He said he got in trouble for saying 'yes ma'am'," explained Wilson.

Confused by his response, Tamarion pulled out a sheet of paper with the word "ma'am" written on it four times per line on both sides. He says his teacher told him to write the word on the sheet because he kept referring to her as "ma'am" despite her instruction not to. As part of his punishment, Tamarion had to have the paper signed by a parent.

Coming up at 4:30 and 6 on @ABC11_WTVD: Parents of a Tarboro 5th grader are upset after their son got in trouble for calling a teacher "ma'am" against her wishes. In response, they say the teacher made him write the word repeatedly on a sheet of paper pic.twitter.com/KJghF8rPQb

"He had a look on his face of disappointment, shame," said his father, McArthur Bryant.

Wilson and Bryant said their children were taught to refer to elders as "ma'am" and "sir," and that Tamarion was not intending to be disrespectful.

"At the end of the day as a father, to feel kind of responsible for that...knowing that I have been raising him and doing the best that I can, it's not acceptable," said Bryant.

They added that Tamarion was hospitalized last month for a seizure-related activity, which included memory loss and hallucinations, something the teacher was unaware of.

Wilson said the punishment was completed in class. She was concerned that Tamarion was missing an opportunity to work during that time.

During the encounter, Wilson said the teacher also told Tamarion that "if she had something, she would have thrown it at him."

"It wasn't right. It wasn't professional. As a teacher, it wasn't appropriate. And I asked her why she thought it was okay to do that," said Wilson.

Wednesday, Wilson met with the teacher and principal to discuss the incident and punishment. During that meeting, Wilson said the teacher acknowledged saying that, but was not serious and believed Tamarion was aware of that.

When Wilson returned the signed punishment sheet, she also included a second sheet, which included Tamarion writing the definition of the word "ma'am."

Following the meeting, Wilson requested her son be moved to a different classroom, which the principal agreed to do.
While Wilson and Bryant are happy the school took action, they want to make sure a future incident doesn't happen again.

"If it happened to my son, I'm pretty sure if not a week, a day, a month, a year, it will occur to somebody else's child," said Bryant.

A family member posted a picture of Tamarion's sheet full of "ma'am" on Facebook Wednesday afternoon. It has since received more than 1,000 comments, and hundreds of shares and reactions.

This is Tamarion's second year at North East Carolina Preparatory School, and Wilson said the teacher has several years of experience.

An official with the school released a short statement regarding the handling of the incident:

This is a personnel matter which has been handled appropriately by the K-7 principal.