This Day in History: Elvis Presley dies in his Graceland home 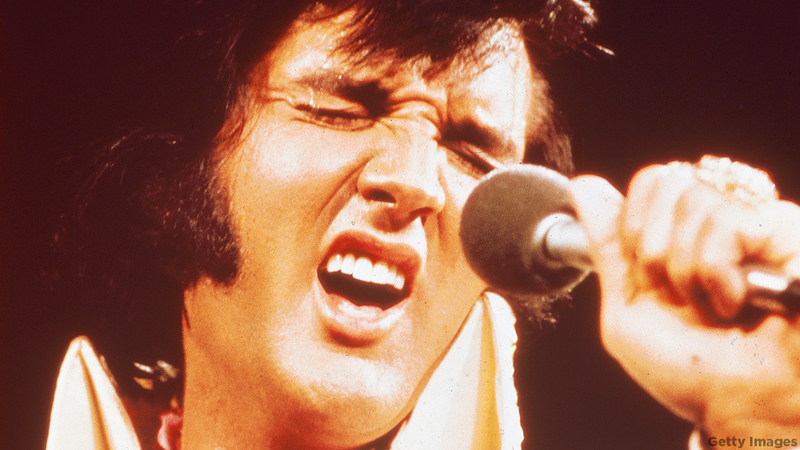 This Day in History: Elvis Presley passes away

On August 16, 1977, Elvis Presley was found dead at the age of 42 in his Graceland mansion in Memphis, Tenn. His early passing was mourned across the world, with legions of fans flocking to his mansion to pay their respects.

Born in Tupelo, Miss. in 1935, Presley was destined for a career in music. For his 11th birthday, he had asked his mother for a rifle but she instead gave him a guitar. At 19, Presley entered a recording studio in Memphis to record two songs for his mother as a birthday present. Studio owner Sam Phillips liked Presley's voice and asked him to record a rendition of the R&B song, "That's All Right" for his Sun Records label.

The recording topped the local chart, and within a year Elvis' contract was bought by RCA for a then-record of $40,000.

Elvis dominated the music charts from 1956 to 1958, ushering in the age of rock and roll with hit songs "Heartbreak Hotel" and the double-sided "Hound Dog"/"Don't Be Cruel." After appearing on The Ed Sullivan Show in 1956, audiences were divided with adoring teenagers and appalled parents. Critics especially took issue with Presley's sexually suggestive pelvis gyrations during his performances.

After an 18-month tour in the U.S. Army, serving in West Germany, Presley began changing his music style to feature less rhythm-and-blues, and more romantic ballads. He also retired from concerts to focus on a film career, all of which featured his musicality. By the end of the 1960s, Presley had few hit songs.

"Burning Love" in 1972 was the last top 10 hit for Presley, who began to show signs of declining health. He had developed an addiction to prescription drugs and gained considerable weight.

After his death in 1977, Presley was buried on the Graceland grounds, which is a major tourist attraction to this day. During his lifetime, Presley was billed as "The King of Western Bop," "The Hillbilly Cat," "The Memphis Flash," and "Elvis the Pelvis," though only one would endure to this day: "The King of Rock and Roll."
Report a correction or typo
Related topics:
arts & entertainmentdistractionbuzzworthyhistorymusicwatercoolerthis day in history
Copyright © 2022 WPVI-TV. All Rights Reserved.
TOP STORIES
2 Montco school districts requiring masks starting Friday
Boy, 4, shot inside North Philadelphia home
Philadelphia Jeopardy! contestant on winning streak
Teachers, parents voice concerns over proposed library policy
Philadelphia pastor accused of child sex assault
South Jersey man returning home after walking the world
Less than 10,000 GOP votes left to count in Pa. Senate primary
Show More
ATV rider dead after colliding with car in Philadelphia
DA: Person shot, killed by officer after struggle in Malvern, Pa.
Beloved kindergarten teacher retiring after 48 years
Boy, 4, hit by SUV in West Philadelphia
FTC warning: Baby formula scammers are preying on parents
More TOP STORIES News