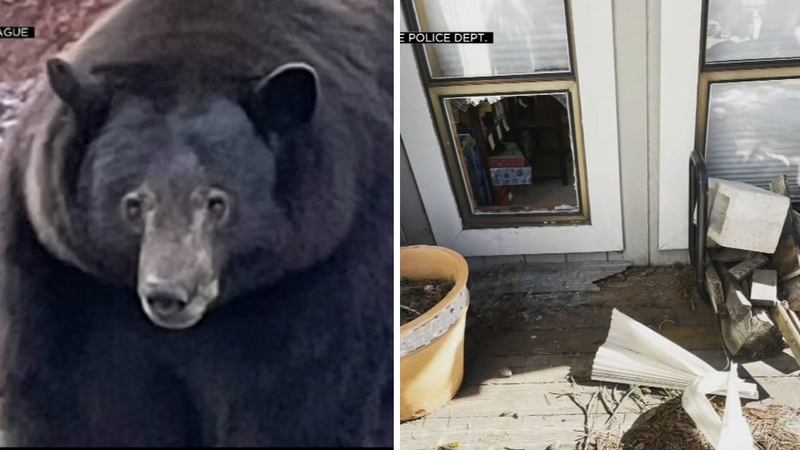 The 500-pound bear is known in the area for breaking into homes and eating people's food. Now, being blamed for 40 break-ins since last July.

"This is what we call a severely habituated bear, meaning this bear has lost all fear of people and it is associating people with food and food sources," Peter Tira with the California Dept. of Fish and Wildlife said.

Police say he carried out his most recent break-in by entering a home through a window. They say officers banged on the outside of the home until Hank popped out of the back door.

"It's really scary because we use to be able to go on walks and bike rides by ourselves but it's become a bigger problem," said resident Olivia Philip.

"So now we bring the bear horn whenever we go on walks or bike rides," said Samantha Philip.

The BEAR League, a nonprofit wildlife rescue group, does not want Hank to be killed. But rather, taken to a sanctuary. Executive director Ann Bryant says a sanctuary in Colorado will take him in.

California wildlife officials plan to trap and euthanize a massive Black bear in Lake Tahoe, but the Bear League is against the voter-approved plan.

"It's extremely frustrating to imagine with these other options to save his life that the threat is always looming over that you know he could be killed," Bryant said. "We can't sit back and just accept that. It's not tolerable, you know. To kill him is going to send a message to the public that the Department of Wildlife doesn't think his life is worth anything, that he's just a nuisance. He's a pest."

The Dept. has set traps in the area in hope of catching the big bear, but they have since been removed after a public outcry. They say authorities have responded to over 150 calls about Hank- including emergency calls where people are fearful for their safety.

Both the California Dept. of Fish and Wildlife and BEAR League agree Hank needs to be taken off the streets, but how that'll happen, is not clear.

John Holden said when he returned home, he quickly noticed a bear on the kitchen counter, scarfing down a bucket of Kentucky Fried Chicken.