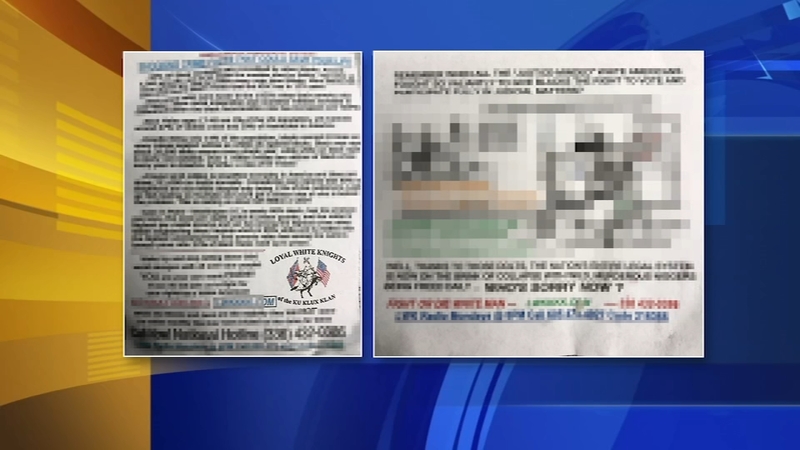 "I walked out Saturday morning and I found that in my driveway. It had rice in it, and I started reading it and it was about Jews and it had KKK right at the bottom there's a phone number on it."

At first, Cherry Hill resident Ken Weidenfeld did not know if the anti-Semitic flier encased in a ziplock back with rice weighing it down was meant just for him.

Saturday morning neighbors began finding fliers, some anti-Semitic with a picture of Hitler.

They included offensive language and one of the fliers had the emblem of the Loyal White Knights of the Ku Klux Klan at the bottom with a phone number to call.

Police say a variety of fliers were found in the Old Orchard section of Cherry Hill specifically on Waverly Road, Lampost Land, and Mimosa Drive.

One neighbor, Natanael Solis of Cherry Hill said, "It's disturbing especially for someone of my color, my race, and it really disturbs me because I wouldn't expect to see that around here."

"This is horrifying. I mean, it's so scary. This is a very integrated neighborhood," said Deborah Perian of Cherry Hill.

John Perian added, "These people here are free to do what they want, we just don't feel like listening to it."

Cherry Hill police began collecting the fliers from neighbors lawns and estimate about 30 homes received them.

Now authorities are looking for video of the people responsible.

They believe the fliers were distributed Friday night into Saturday morning.

The person or people responsible could face charges. Until they are found, the chief of police has a message for them.

"We understand people have a right to free speech but this type of behavior, coming in the dark of night and throwing these on people's lawns is cowardly. If you want to contact me and have a conversation I'll be more than happy to have a conversation with you, but the way you're going about it is not acceptable," said Chief William Monaghan.

Congressman Donald Norcross issued a statement on Sunday regarding the fliers, stating, "I've said it before and I'll say it again -- hate, violence and racism have no place in our communities or our country. This cowardly, offensive act is an attack against all of us, and we must fully investigate this and hold the individuals responsible accountable."