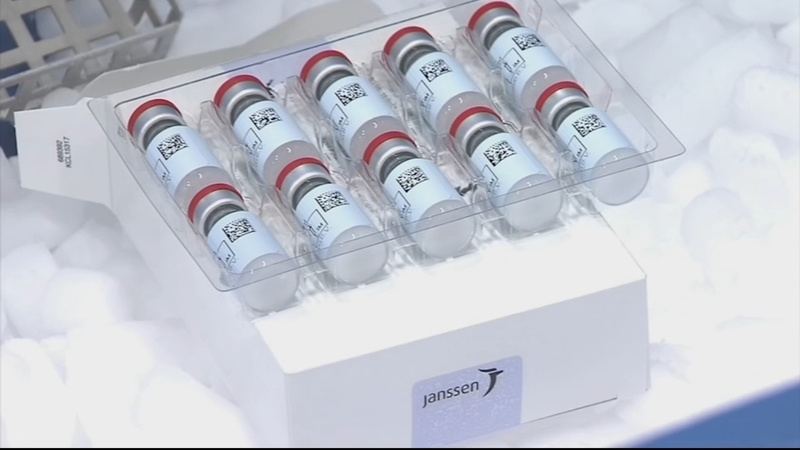 PHILADELPHIA (WPVI) -- U.S. health advisers endorsed a one-dose COVID-19 vaccine from Johnson & Johnson on Friday, putting the nation on the cusp of adding an easier-to-use option to fight the pandemic.

Part of the trial to test the efficacy happened in Philadelphia at Temple University Hospital.

Twenty-two-year-old Michael Crompton was one of the 530 people to take part in the trial.

He said he doesn't know for sure yet if he received the vaccine or the placebo; but based on his reaction to the shot, it's leading him to believe he got the Johnson & Johnson vaccine.

"I probably got the shot around 5 p.m., and around 1 a.m. or 2 a.m, I woke up and ran a 102.5-degree fever. I had chills, and I was sweating," said Crompton. "I was speaking with a nurse at the time, and they said if you were to get sick, most likely that's an indication you actually received the actual vaccine."

"I think this has the potential to be a big game-changer for the world," said Jackson.

Dr. Jackson said when it comes to COVID-19 prevention, the Johnson & Johnson vaccine isn't as effective as the Moderna or Pfizer two-dose vaccines, but it's still an important tool in the fight against COVID-19.

She said for those who got the vaccine during the trial, no one had to be hospitalized, and that's a big deal.

"I don't think that having or not getting COVID is the key, so much as not needing the hospital and not dying," said Jackson.

She believes if enough people are willing to get it, our old way of life isn't far off.

"I think the more people we get vaccinated, the less we're going to see those variants, the sooner we're going to be interacting with our friends and family," said Jackson.

Jackson added another good part about the Johnson & Johnson vaccine is it doesn't have to be stored nearly as cold as the others.

Crompton said the trial process was easy; he just had to fill out some paperwork and then got the shot in the arm.

"It was nerve-racking at first, but to hear this is going well, and knowing I could be a part of this, help out and save lives is awesome," said Crompton.
Report a correction or typo
Related topics:
health & fitnessphiladelphiahealthcoronaviruscovid 19 vaccinecovid 19
Copyright © 2021 WPVI-TV. All Rights Reserved.
COVID-19 VACCINE