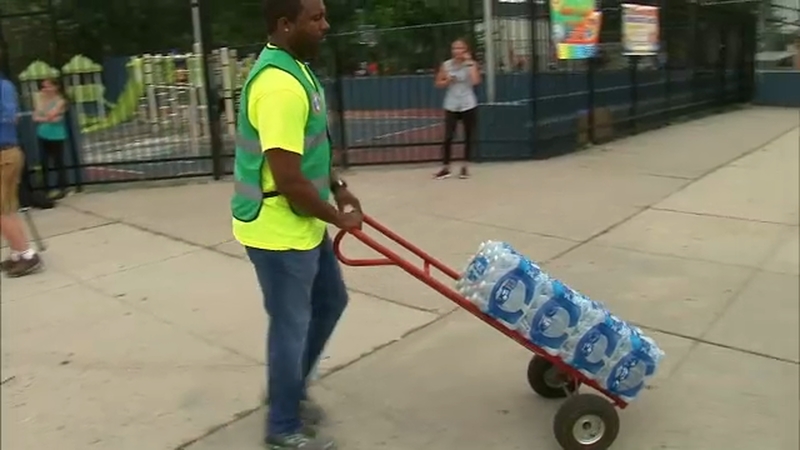 NEWARK, New Jersey -- Amid concerns about lead in water and filters that may not be working in Newark, New Jersey, it turns out the bottled water handed out as a response was past its best use date of May 30, 2019.
The city temporarily paused water distribution Tuesday while officials waited for a new shipment of water from the State of New Jersey.

The first shipment of water had a best by date that had passed, but the state believed it was still safe to drink. The state replaced those 20,000 cases with new ones and ordered 50,000 additional cases.

According to the International Bottled Water Association, "The U.S. Food and Drug Administration (FDA), which regulates bottled water as a packaged food has determined that there is no limit to the shelf life of bottled water. The FDA does not require an expiration date for bottled water products."

"Because it is packaged under sanitary, good manufacturing practices; is in a sanitary sealed container; and does not contain substances (such as sugars and proteins) typically associated with food spoilage, bottled water can be stored for extended periods of time without concerns.

Only one state (New Jersey) has ever required expiration dating for bottled water. However, the New Jersey state legislature repealed the 2-year expiration date law several years ago, noting that there was no scientific evidence to support such a requirement. Some companies still place date-based lot codes on bottled water containers, which are typically used to assist in managing stock rotation at distribution and retails points."

Before workers started handing out the new bottles of water at 3 p.m. Tuesday, there was already a line of nearly 100 people waiting outside the Boylan Recreation Center.

"This is a slap in the face to the residents of the city of Newark," said resident Donna Jackson. "As you can see everybody is standing in line. We are now in panic mode in this city because the feds had to come in to tell us to stop drinking the water."

The state has been providing water from its emergency stockpile to the City of Newark to distribute to residents. The state procures the water bottles through a private vendor.

Crystal Rosa, the press secretary for the city of Newark, released the following statement:

"Out of an abundance of caution, the City arranged for a shipment of new water. The water that the City received had a best by date that was past due. The U.S. Food and Drug Administration (FDA) has determined that there is no limit to the shelf life of bottled water as long as it is properly produced and unopened. The FDA does not require an expiration date bottled water, and some companies use best by dates to manage stock rotation."

Over the weekend officials announced tests on the water in Newark indicated there were still dangerous levels of lead and residents were urged to avoid drinking tap water.

The U.S. Environmental Protection Agency said it's important residents in homes with old lead pipes use bottled water until there is a reliable solution.
The city distributed water filters to 19,000 homes last fall and recently decided to conduct tests on the effectiveness of the filters. The EPA said filters distributed to Newark homes to protect residents from elevated levels of lead may not be working as intended.

The city hosted a virtual town hall on Facebook Live Tuesday night to update people on the lead service lines and water distribution.