A total of 13 hepatitis A are under investigation, officials said.
WPVI
By 6abc Digital Staff 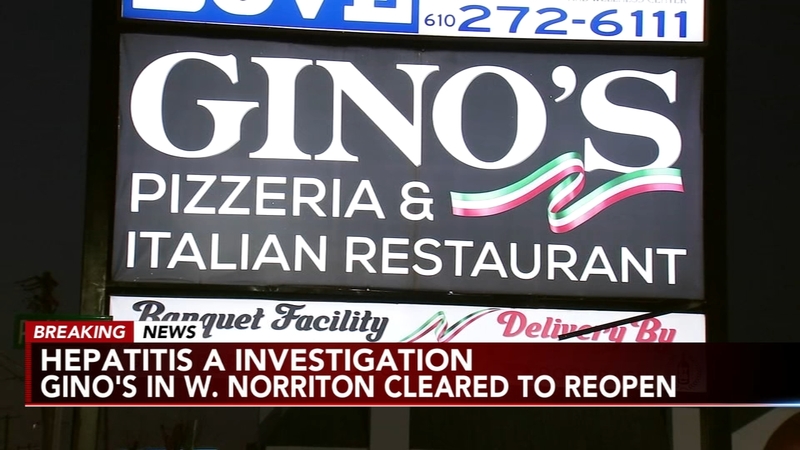 Montco restaurant can reopen as officials investigate Hep A outbreak

PHILADELPHIA (WPVI) -- The Montgomery County Office of Public Health announced Thursday that it has cleared an Italian restaurant to reopen as officials continue to investigate a deadly hepatitis A outbreak.

Gino's Restaurant in West Norriton was closed on January 7, but officials have not confirmed the restaurant to be the source of the outbreak.

A total of 13 hepatitis A are under investigation, officials said. Ten are confirmed and three remain suspect. Of the ten confirmed cases, seven people were were the hospital at one point in time, but none currently remain hospitalized.

Three deaths are linked to this outbreak.

The Pennsylvania Department of Health provided this information on hepatitis A:

"Hepatitis A is a highly contagious, vaccine-preventable, liver infection caused by the hepatitis A virus (HAV) ranging in severity from mild infection lasting a few weeks to severe disease lasting several months. Hepatitis A usually spreads when a person unknowingly ingests the virus from objects, food, or drinks contaminated by small, undetected amounts of stool from an infected person. Hepatitis A can also spread from close personal contact with an infected person such as through sex or caring for someone who is ill."

Signs and symptoms of hepatitis A can include the following:

This is the latest hepatitis A warning from health officials in the Delaware Valley in recent years.

In November, a Starbucks in Camden County, New Jersey was the center of a hepatitis A investigation.