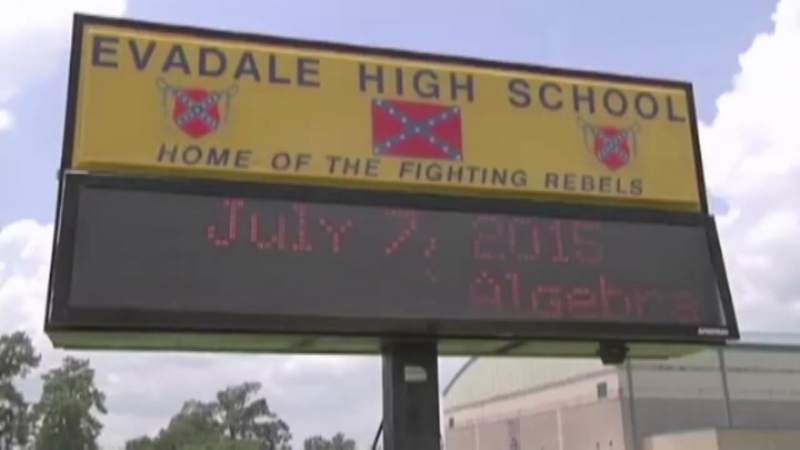 EVADALE, TX (WPVI) -- A Southeast Texas high school is rallying around the Confederate flag after the symbol has sparked controversy across the country.

The Confederate flag is posted on the fence of the football field, covers a gym wall and is displayed front and center outside a high school in the Evadale school district, KFDM-TV reports.

Jamie Richardson, the valedictorian of the Class of 2015, said the emblem has always been a kind of a pride for her school.

"If you look at our emblem it's not just the confederate flag, it shows symbols of everything that we represent academically and also outside of school with extracurricular activities and such," Richardson said.

The debate over the Confederate flag comes weeks after the shooting deaths of nine people in a historically black church in Charleston.

Police have charged a man shown in pictures with the flag, who they say was motivated by hate. Some argue the flag is a symbol of racism and slavery, while others argue it's about state's rights and southern pride.

"The Confederate flag has never been about hate or racism and it's never been used to discriminate students or any group of people. It's always just been kind of a pride thing to be proud of our school," said Richardson.

"It's always been a symbol of pride and you know our mascot, the fighting rebels. You know the rebel soldier was a mighty fighting warrior so we kind of tend to like that tradition," Richardson's father, Milton Richardson, said.

The high school has used the Confederate flag since the 1950's, and the superintendent said there are no plans to stop now.

He tells KFDM-TV the school district always follows the wishes of the people living within the district.