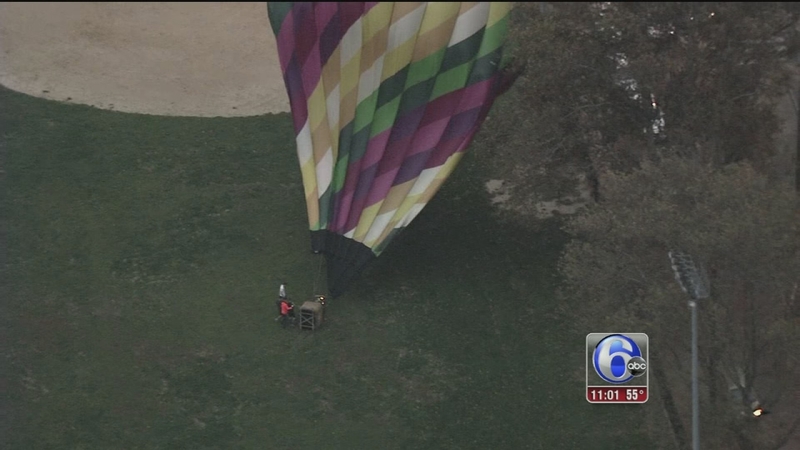 KENSINGTON (WPVI) -- The FAA is continuing to investigate a hot air balloon landing at a recreation center in the Kensington section of Philadelphia.

The landing took place just after 4:30 p.m. Wednesday in a field at C and Westmoreland streets.

A photo taken by Barbara Baur of Silver Gold Photography showed the balloon coming down just before landing in a field.

The field is located at the McVeigh Recreation Center.

The pilot tells Action News he would have preferred to have landed somewhere else, but this was a textbook landing.

"It's a perfect, normal, everyday balloon flight, with a normal, perfect landing in a perfect spot," said H.M. Steiger, pilot.

But exclusive video from Chopper 6 paints a different picture, showing a bumpy landing for pilot Steiger and his three passengers.

Onlookers sprinted to help the crew, holding on to the basket to keep the 80-foot-tall balloon from dragging off the ground a second time.

Steiger says he was planning to land in the park.

#NOW: Hot air balloon pilot tells @6abc this flight was a training exercise and this was a "planned landing" pic.twitter.com/6t7HEE1bAE

"As planned as can be," said Steiger.

But police say the crew encountered strong winds during its flight, and was looking for the closest and safest place to land.

"We're concerned because it's not really that safe, because C and West Moreland is in the city. This was not a pre-plannned landing destination," said Philadelphia Police Chief Inspector Scott Small.

During flights, pilots can only steer a hot air balloon by climbing or descending into winds blowing in different directions.

The crew snapped a picture at 17,500 feet, saying Wednesday's mission was to measure fuel consumption at different altitudes.

"It came out the sky. I'm like damn what the hell is that?" said Darrell Smith of Kensington.

"When I saw it out of the window in my room, I'm thinking, 'Oh my God,' " said Yari Agosto of Kensington.

"The good thing was there are no kids in the park where it landed," said Berkys Beez of Kensington.