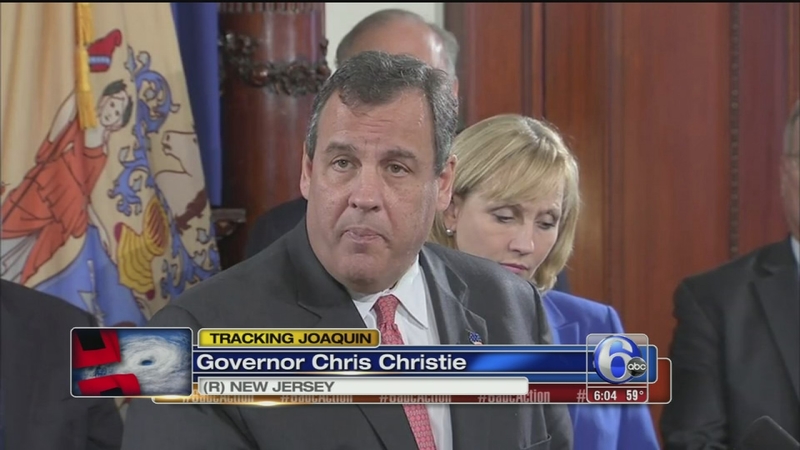 TRENTON, N.J. (WPVI) -- Governor Chris Christie has declared a State of Emergency in New Jersey ahead of severe weather and the threat of Hurricane Joaquin.

Christie made the announcement as a storm system, not related to the path of Hurricane Joaquin but due to a tropical frontal boundary, makes its way through the region.

We are prepared. I need everyone to not panic.

"We know there is definitely going to be moderate and likely to be major flooding events in South Jersey Friday and Saturday with 5 to 6 inches of rainfall expected to come," Christie said in a Thursday morning press conference.

Christie says the state Office of Emergency Management was activated at 6 a.m. Thursday and the Department Environmental Protection has reached out to communities about moving sand to protect beaches. He says the focus right now is on Salem, Cumberland, Atlantic and Cape May counties.

Right now our concern is 5-6" of flooding in Del Bay & Coastal Areas.

The system could mean beach erosion - something that's already been a problem - and flooding of roads along the shore and in flood-prone inland areas.

As of Friday morning, the entire state was under some kind of flood watch, warning or advisory from the National Weather Service, which is telling people to be prepared for rising water levels and not to drive through flood waters.

For the people in other 17 counties of New Jersey, Christie says, "Stay tuned."

As for Hurricane Joaquin, Christie says it is too soon to tell what type of damage it will cause.

"At this point, it's just too soon to say with any certainty whether or not Joaquin is likely to have a direct impact on New Jersey or not," Christie said.

The National Hurricane Center forecast Thursday morning suggests the storm could skirt past New Jersey and make landfall on New York's Long Island as a tropical storm on Tuesday morning. But confidence in the longer term forecast remains low, the center said.

Christie wants residents to be prepared, including those who have generators to make sure they know how to use them properly in case of power outages.

Make sure you check http://t.co/MfW7tyNwv8 for storm updates and ways to get prepared.

"I'm not here to say Sandy II is coming. I have no way of knowing that. But what I want people to know is if it did, we're as prepared as you could be to deal with it," Christie said.

He said he will consider evacuations, if necessary.

"We're not there yet, and if we are going to be there, my guess is we'd be there in 12 to 24 hours and we'll let people know," Christie said.

Christie says his office will also make sure there will be shelters in place for people who might need them.

"We are not quite sure if this is going to be a single punch or a double punch," Christie said.

The state Office of Emergency Management recommends people have three days of water and nonperishable ready-to-eat food, along with a battery-operated radio and extra batteries, a flashlight, a week's supply of medicine and some cash.