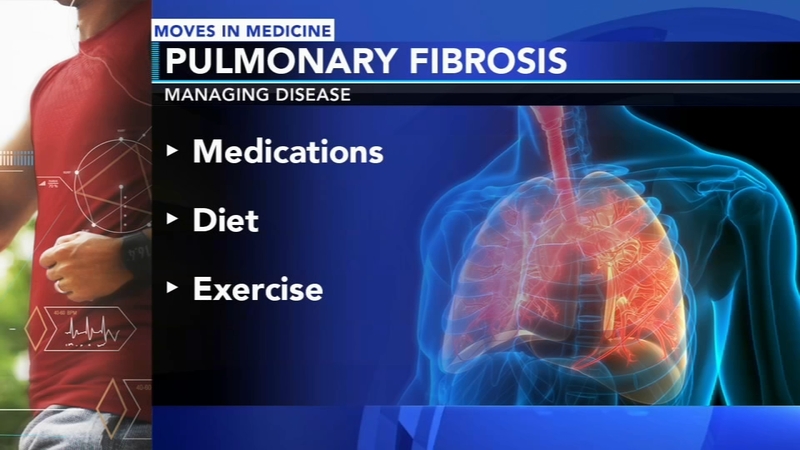 Support and education help both patients and caregivers navigate IPF

LAFAYETTE HILL, PA. (WPVI) -- Learning you have a life-threatening condition can be frightening.

But finding support, and other patients with the disease can make all the difference in navigating it.

Dennis Hood first went to the doctor for a chest cold that wouldn't go away.

After medications failed, a chest X-ray showed a surprising cause.

"Lo and behold, he's the one that first told me that I had Idiopathic Pulmonary Fibrosis," recalls Dennis.

"It prevents oxygen from going from those tiny air sacs in the lungs to the bloodstream, making people more short of breath," says Michelle Vega-Olivo, CRNP, Nurse Practitioner with the Temple Lung Center.

Idiopathic means the cause is unknown, however, Dennis believes it runs in his family.

It likely killed his father, a Philadelphia firefighter, who died in his early 60s.

At the time, the cause was believed to be asbestos.

Managing medications, diet, and exercise are all important, so she suggests patients, and their caregivers as well, join support groups.

"It's helpful for patients who are early on the diagnosis, and then, you know, down the line, if they have questions about oxygen, and now they're on oxygen, they learn from each other, they become friends," says Vega-Olivo.

In addition to its own support groups and seminars, Temple partners with the Wescoe Foundation, created by Jennifer Wescoe in memory of her dad Ron, who died of IPF.

"He was a baseball player. He was a football coach. He made us laugh. And he was an avid fisherman," says Wescoe proudly.

The Wescoe Foundation, based in Coopersburg, Pa., reaches patients and families even in remote areas.

"We actually launched the only support network for pulmonary fibrosis in the United States," says Wescoe, adding, "We have over 13 support groups within Pennsylvania and New Jersey."

Doctors and scientists are also an important part of the support networks - educating patients, keeping everyone updated on new medications and the latest research.

Dennis says what he and his wife have learned has helped him stay active, volunteer in the community, and spend time with his five grandkids, despite IPF.

"I've had it for almost 5 years and I'm living with it and doing just fine," he says with a smile.
Report a correction or typo
Related topics:
health & fitnesshealthmoves in medicine temple
Sponsored Content
Copyright © 2022 WPVI-TV. All Rights Reserved.
MOVES IN MEDICINE TEMPLE
SPONSORED: What is stress incontinence? Diagnosis, effect on women, treatment
SPONSORED: "Spray-on skin" heals major burns in two-thirds less time
Non-Alcoholic Fatty Liver - a very common disorder lacking awareness
SPONSORED: Caring for the whole patient - and beyond - after burn injuries