Is Jay Wright the greatest coach In Philadelphia sports history?

We review his case for Philly's top coach with Nova set for the Final Four.
WPVI
By Jamie Apody 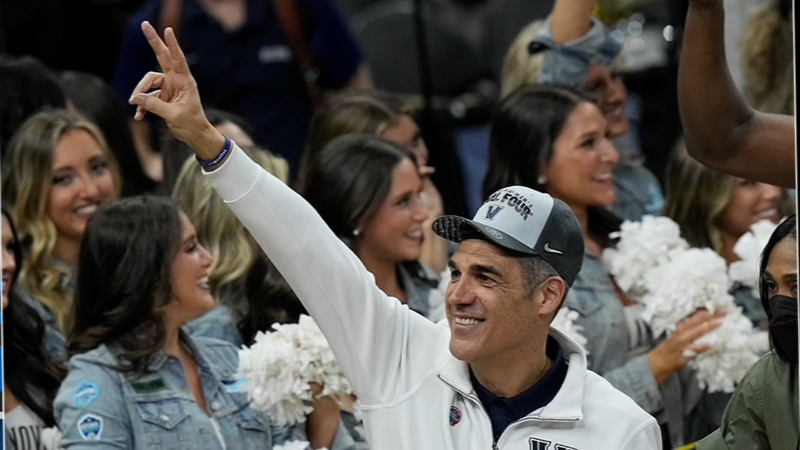 Is Jay Wright the greatest coach In Philadelphia sports history?

VILLANOVA, Pa. (WPVI) -- As I stand here on the Villanova Campus, shortly after the Wildcats left for the Final Four for the third time in seven seasons a thought crossed my mind.

Is Jay Wright, the GREATEST coach in Philadelphia sports history?


Should the Wildcats beat Kansas on Saturday, then win in the Championship game, we'd be talking about a run that hasn't really been seen in college basketball since John Wooden's UCLA days.

It's already a huge accomplishment that this small school on the Main Line is being mentioned among the Blue Bloods they'll join at the Final Four: Duke, North Carolina and Kansas.

This is Mike Kryzyzeski's final Final 4.

Once he's gone, the only active coaches with multiple titles will be Wright.

Even if he doesn't win this year, Wright might already be the new King.

He's already in the Hall of Fame.

He's been courted by several NBA teams and bigger schools.

But he chooses to stay here, because he's Philly through and through.

So where does Wright rank?

Connie Mack? His longevity won't ever be equaled, but his overall record was below .500

Fred Shero? What he did was remarkable.

You can make an argument either way. But Jay is finding this success at a small school, in an era when players are mostly one and done in the NCAA.

Another title could seal the deal for Wright in Philly.

He's doing it with guys who aren't necessarily McDonalds All Americans, but he gets them to buy in, to stay and to win.

He also leads them to the NBA.
Report a correction or typo
Related topics:
sportsvillanovaaction news sportsvillanovancaasports flashfinal four
Copyright © 2022 WPVI-TV. All Rights Reserved.
SPORTS FLASH
Joel Embiid vs. Nikola Jokić: NBA MVP voters only got it half right
After a splashy offseason, it's a great time to be an Eagles fan
76ers-Raptors playoffs preview: Predictions, pressure on Harden, Doc
Phillies load up their lineup, but will it be enough?
TOP STORIES
AccuWeather Alert: Tracking Severe Storms Today
16-year-old shot 7 times in Parkside
Watch Inside Story May 15 show | Final look at PA primaries
School Closings
Find out which schools are closed in your district.
Baby formula maker Abbott says agreement reached to reopen plant
Retired cop who confronted gunman in Buffalo shooting hailed as 'hero'
63-year-old woman killed by driver at Jersey Shore: Police
Show More
What is white replacement theory? Belief fueling racist attacks
New initiative aims to crack down on Philly's nuisance properties
Penn Live Arts celebrates 50th anniversary with packed lineup
Man shot while getting water ice in Philly
What we know about the victims of the Buffalo shooting
More TOP STORIES News