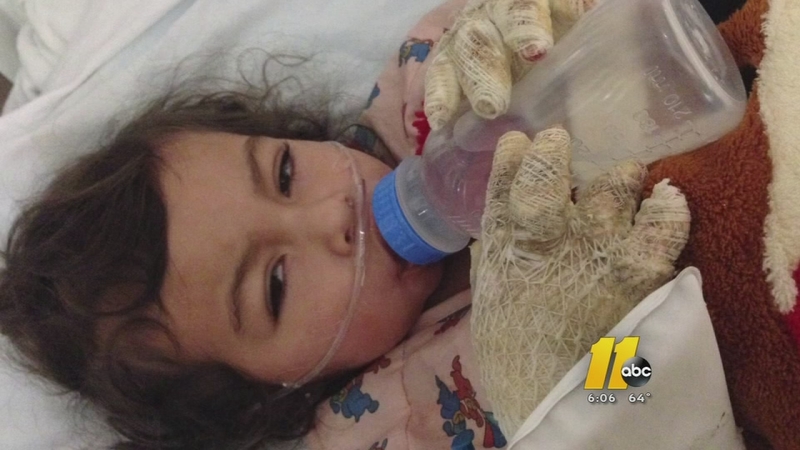 CHAPEL HILL, N.C. (WPVI) -- A little girl from Chapel Hill is still healing nearly a year after suffering third-degree burns to both of her hands.

Jaymie Ortiz's parents say the girl's babysitter at the time is to blame for their daughter's pain and suffering and the medical bills that are now piling up.

At two years old, Jaymie is capable of lighting up a room. Her two bright eyes and rambunctious spirit overshadow her scarred hands that are covered with two pink compression gloves.

"All she knows is that they're boo boos," said Jaymie's father, Edwin.

But they're scars. Scars that will always remind her parents, Edwin and Patricia, of the call they got from her babysitter last April telling them Jaymie had been burned.

"She said that it was both hands," Patricia said.

They remember getting to their one-year-old who was crying in pain.

"She starts running toward me and she has her hands up, I can see the red flesh and like the skin just hanging off her hands," Edwin explained.

The Ortiz's believe their daughter's hands were dipped into a pot of boiling water.

Pictures from Jaymie's visit to the UNC Burn Center that day are too graphic to share. Her first surgery was followed by a month-long stay in the hospital, more skin grafts, and therapy.

"Jaymie's a champ. I can tell you this much, I've seen grown men tell me that they wouldn't be able to handle it." Edwin said.

As a Durham police officer, Edwin's insurance has covered much of the medical expenses. However, Patricia had to quit her job to stay at home with her girls, and bills keep rolling in.

"We don't have the money to pay," Patricia explained.

To help, Edwin's coworkers have launched a GoFundMe page for Jaymie. Her family says they had every reason to lose faith in humanity...until now.

The Ortiz's say Jaymie's recovery, while slow and grueling, has been successful. She can move her hands without pain, but she still has some surgeries ahead of her.

To donate to the Ortiz family, visit their GoFundMe page by clicking here.