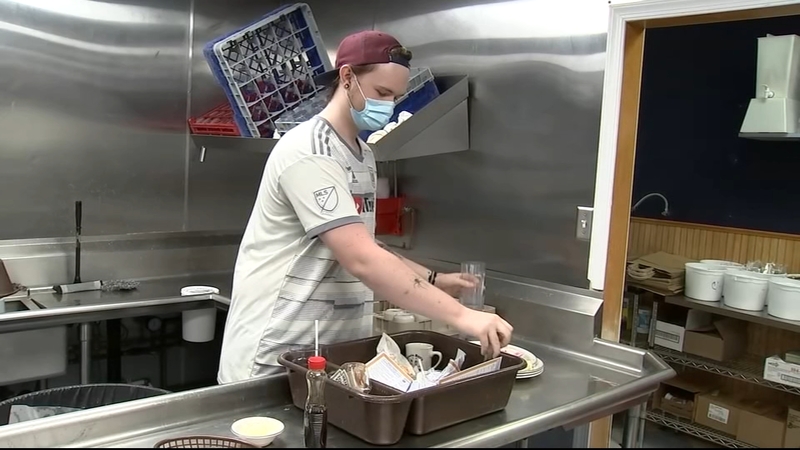 AVALON, New Jersey (WPVI) -- While Gov. Phil Murphy said Friday he hopes to have the Jersey Shore fully reopened this summer, many businesses are struggling to hire enough staff.

Folks at Uncle Bill's Pancake House are trying to get ready for summer with a smaller than usual staff at their Avalon and Stone Harbor locations.

He says he's upped the pay and is offering year-round jobs to seasonal employees in Avalon.

He says between stimulus payments and unemployment, not as many people need jobs like these.

"With the unemployment numbers being what they are and what people are getting it's really not convincing enough for my family business to be able to give them the money to make them whole," said O'Hara.

Another factor is the lack of foreign exchange students coming to the country to work with J-1 visas.

Thousands of them normally live and work at the Jersey Shore each summer making up a large part of the seasonal workforce, said Stockton University associate professor of economics Oliver Cooke.

While J-1 visas are no longer banned, getting those workers here could still be difficult this summer.

"There's an enormous backlog of these applications sitting around in consulates around the world," said Cooke.

He also said while offering higher pay may be painful for small businesses, this summer's expected profits at the Jersey Shore might be worth it.

"There's a lot of pent-up demand," said Cooke. "I still think there are some real lingering effects as it relates to fear of flying, being in big cities."

And because the restaurant and hospitality industry took such a big hit during the lockdown, many people have looked for employment in other fields.

"This is the first time my sister-in-law put an ad on our webpage," said manager Angel Dalrymple.

Managers say groups of college students living down the shore for the summer normally come in looking for work, renting houses together. But she hasn't seen that this year.

Businesses in Sea Isle City are even reaching out to each other, looking for leads.

"We call and we say, 'Do you have anybody you're not hiring? Can I see their application?'" Dalrymple laughed.

She says they've also increased their pay and are offering flexible hours.

If they don't hire enough people?