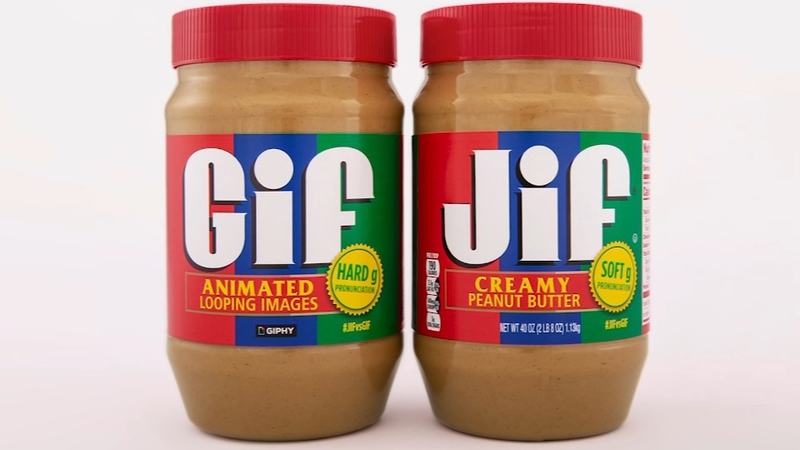 Jif has released a limited-edition jar of GIF peanut butter in a collaboration meant to be as smooth as the product itself.

The purpose is to "settle the great debate" over how to pronounce the looping image format that has overtaken in the internet, J.M. Smucker Company, the brand's manufacturer, said in a press release.

When is it okay to call a GIF a “Jif”? Never. Help us put the lid on the infamous internet debate once and for all. #JIFvsGIF https://t.co/INoJNiquwq

Although Jif is obviously pronounced with a "soft G," people often mispronounce the word "GIF," which is short for Graphics Interchange Format. It's said with a "soft G" like the peanut butter and not a "hard G." That's according to creator Steve Wilhite, who made the declaration in 2013 while accepting a Webby Award.

Regardless of the official ruling, the internet has remained divided. Jif is partnering with GIPHY, a GIF search engine, to "put a lid on this decade-long debate": Both GIF and the peanut butter are pronounced "Jif." However, the peanut butter company thinks GIF should be pronounced with a "hard G," as the label suggests.

The limited edition jars went on sale Tuesday for $10 on Amazon, just in time to celebrate National Peanut Butter Lover's Day on March 1. (The typical price of the same-sized jar for regular peanut butter costs roughly half of that.)

The jars sold out. Jif said they will release 500 more jars on Wednesday afternoon.

Due to an overwhelming response on our @GIPHY x Jif Limited Edition Jars, we will have a limited selection of 500 jars that’ll be available tmrw after noon EST. We’ll send a tweet when they’re in stock, but be quick, they’ll go faster than you can pronounce a Hard G. #JIFvsGIF pic.twitter.com/tMJO0SLGJf

Smucker's is the latest brand to tap into the power of the internet for viral fame. Planters, owned by Kraft Heinz, recently shook up Twitter when it killed off its mascot Mr. Peanut in an accident. However, the ad faced minor backlash, and Heinz was forced to dial back promotion of the stunt following the death of NBA star Kobe Bryant.

Burger King also ignited the internet's ire when it promoted a moldy Whopper, and Wendy's regularly uses its Twitter account to lash its rivals.

Smucker's owns a number of consumer brands, including Folgers coffee, Meow Mix and Crisco. It reported better-than-expected earnings in November, but sales of its consumer foods slightly declined. Smucker's recently said lower prices at supermarkets for peanut butter and coffee are hurting its bottom line.

Shoppers are also increasingly shifting their preferences toward more nutritious foods that are lower in calories. That poses a problem for peanut butter that's packed with sugar. Competition is growing from innovative upstarts selling organic and natural products.