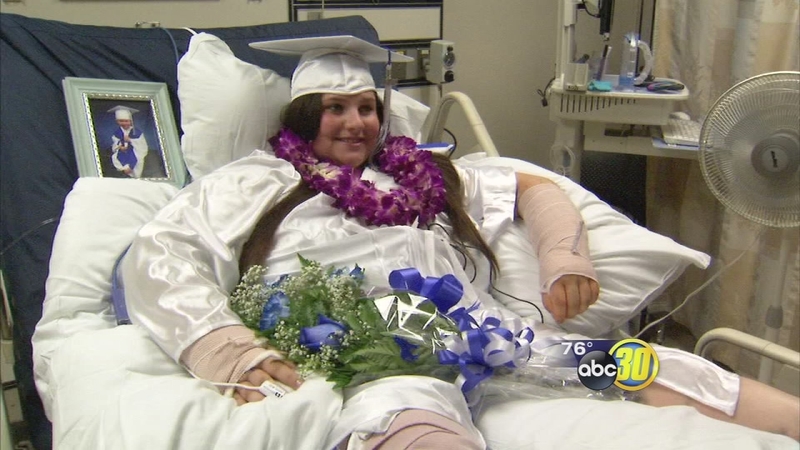 MADERA, Calif. -- Just days before getting her diploma, a teen from Madera High School in Madera, California was involved in a severe car accident.

Doctors listed her injuries as life-threatening. She is recovering but is still hospitalized.

Eight days after surviving a traumatic car accident. Memories of the crash are as fresh to Chayla Wiggers as her wounds.

"Crazy, they said it was insane that I was alive. They were actually shocked."

Last Wednesday, the car she was in crashed into a guardrail along Avenue 9. The others inside escaped unscathed, but rescuers had to pull her out using the jaws of life.

"They are all heroes, but in my eyes this(Chayla) is the hero of them all," said Chonna Defranco, mother.

That's because mom knows what other challenges her daughter had to overcome to be here.

"We've had some serious issues with her growing up. Of course teen pregnancy, that was an interesting one," said Defranco.

Chayla's 20-month-old daughter was in the car with her during the accident. Once Chayla found out her baby was safe her attention turned to something else she deeply cared about.

"The first thing you said to me when I got to the hospital was, mom, I'm not going to graduate. And guess what baby? You're graduating," said Defranco.

There was a small problem, though-- Chayla couldn't walk. The family and the school district worked together to bring the ceremony to her. Her daughter, Carsynn, accepted the diploma in her name. All while Chayla watched from her hospital room.

"Forever, I've been looking to graduating. It's when I get to become an official adult," said Chayla.

Until then she's going to keep on doing what she does best-- overcoming one small obstacle at a time.

"It got tough really, seems like a lot, but when you get through it, it's just a bump in the road."