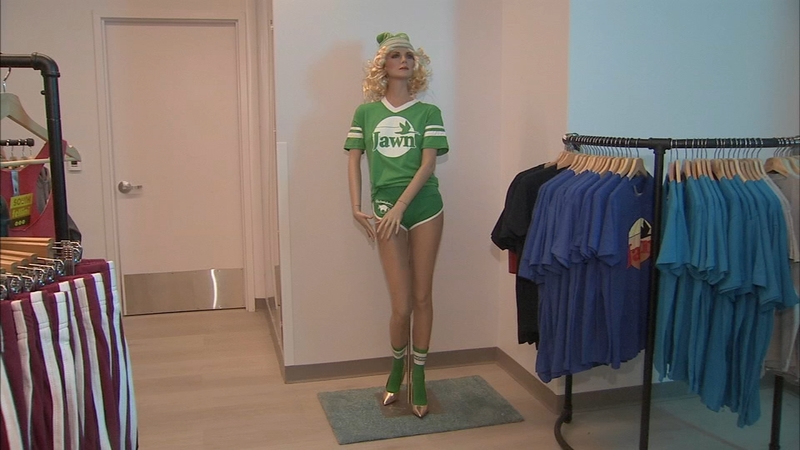 PHILADELPHIA (WPVI) -- The grand opening of Fashion District Philadelphia in Center City Thursday is sure to be a star-studded event. In fact, there is already one 80s icon dressed and ready to go.

Most people probably know her as Emmy - the mannequin who came to life in the 1987 film "Mannequin."

The film was shot on location at the Wanamaker building - currently Macy's - in Center City Philadelphia. And now, Emmy has returned to her Philly roots.

But how did this famous model from another era end up in a Fashion District shop wearing a Wawa-esque 'jawn' shirt and a 'crumb bum' hat?

You can thank South Philadelphia's Johnny Zito and Tony Trov, the co-owners of South Fellini.

"Tony worked for a crew member from the film 'Mannequin' who discovered Emmy in storage one day. For years, he's been looking for an excuse to break her out and polish her off," Zito told Action News.

But after a decade in storage, Emmy needed a makeover, one worthy of an 80s starlet.

She spent a decade in storage, but Emmy from Mannequin is back and modeling the threads in South Fellini. pic.twitter.com/dlAR11sdpN

"So we did a little work to get her standing upright again, had to paint a few rough edges, and buy a new wig at the Halloween store. But she's good to go," Zito said.

Now Emmy is no dummy - she's wearing the Fellini gear and ready for Eagles season.

"We like to say if you move to Philly and you decide to stay here, you come get your 'jawn' shirt from South Fellini, and you plant your flag, and it's a done deal," Zito said.

That goes for humans and mannequins.

Zito said South Fellini, whether it be their Passyunk Avenue location or their new Fashion District store, is all about making "old Philadelphia marketable again for new Philadelphians."

"We are just stewing in the culture of South Philadelphia. We like to rework some of that iconography and try and update it with inside jokes with phrases like 'jawn' and 'crumb bum," Zito said.

Johnny Zito and Tony Trov are co-owners of South Fellini, one of the four local business opening a new location at Fashion District Philadelphia. pic.twitter.com/ObYQEB1zIK

Zito and Trov are very excited to be part of the local shops that are opening at the former Gallery at Market East. It's a much larger space than their original, but the co-owners are really happy to succeed at Fashion District Philadelphia.

In other words, with Emmy by their side, their motto is likely: 'Nothing's gonna stop us now.'