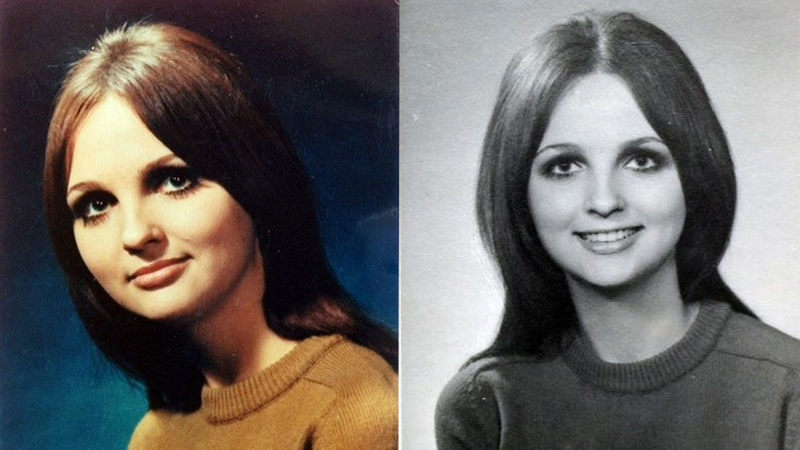 LOS ANGELES -- The identification of a 19-year-old Canadian woman found savagely stabbed to death in Los Angeles in 1969 has brought some closure to her last living immediate relative but also resurrected decades-old speculation that her murder is connected to the Manson family killings.

Los Angeles police revealed Wednesday that they had at last identified the young woman as Reet Jurvetson of Montreal, described by her sister and a friend as full of life and longing for adventure.

Jurvetson's body was found Nov. 16, 1969, by a birdwatcher in dense brush off iconic Mulholland Drive, about 6 miles from the site of the Manson family killings of pregnant actress Sharon Tate, the wife of director Roman Polanski, and four others.

Jurvetson had been stabbed 150 times in the upper torso and neck, wasn't carrying identification and eventually became known as Jane Doe No. 59.

Police made the identification, first reported by People magazine, using DNA after Jurvetson's sister recognized a photo of the young woman's body posted online. The confirmation came in December.

"After all these years, we are faced with hard facts," Anne Jurvetson said in a statement released Wednesday through police. "My little sister was savagely killed. ... I am horrified to think of how terribly frightened and alone she must have felt as she died."

Jurvetson, 73, described the "sad, helpless kind of feeling" of not learning what had become of her sister until 46 years after her death - "to always question, to never know, to imagine scenarios, all the while still hoping and dreaming that one day there would be an answer."

Though she now knows her sister's fate, Anne Jurvetson said she still has a lot to come to terms with and is hopeful that media attention on the case leads the killer or killers.

Tate was killed in her home, along with four others, on Aug. 9, 1969, three months before Jurvetson's killing.

Though detectives haven't found any concrete link between Jurvetson and the Manson family killings, they haven't ruled it out, Rivera said.

He pointed out that Jurvetson was stabbed like most other Manson victims, and that her body was found near the site of some of the Tate killings in the same three-month period.

"We don't rule anything out," Rivera said. "Everything is on the table until proven otherwise."

Rivera said detectives are trying to track down their best lead, a man known as either "John," or the name's French pronunciation, "Jean." Jurvetson met the man in Toronto before flying to Los Angeles to see him the summer of 1969, he said.

Police hope renewed media attention will generate tips leading to the man and other witnesses.

Sandi Gibbons, a retired reporter who covered the Manson trial, said she doubts Jurvetson's killing is connected to the Manson family murders.

Manson and many of his followers had been arrested the month before Jurvetson's death, and Gibbons pointed out that Mulholland Drive was a well-known dumping ground for bodies in the 1960s and 1970s.

"It doesn't feel like a Manson killing," said Gibbons, who later became a spokeswoman for the Los Angeles County District Attorney's Office.

She said her sister sent her family a postcard saying she had found an apartment and was happy, but they never heard from her again. Her parents never reported her missing because "they thought that she was just living her life somewhere," Anne Jurvetson said.

Piret Koppel, a Montreal psychotherapist, said she and Reet Jurvetson were friends, growing up in the same small, close-knit Estonian community in Montreal.

She described Jurvetson as intelligent and vivacious, and said she was distraught to finally learn how her friend had died. "I have shivers on my body when I think about what happened to her," she said.
Related topics:
los angeleslos angeles countymurdermysterious deathcharles manson
Copyright © 2022 by The Associated Press. All Rights Reserved.
TOP STORIES
DA: Person shot, killed by officer after struggle in Malvern, Pa.
CDC advisory panel greenlights booster shots for children ages 5 to 11
FTC warning: Baby formula scammers are preying on parents
Delaware AG now investigating condemned Wilmington apartment complex
What is monkeypox? What to know after US confirms 1st 2022 case
South Jersey man returning home after walking the world
Rihanna and A$AP Rocky welcome their first child
Show More
Eagles have a loaded roster, but will QB hold them back?
Delco bus driver accused of taking upskirt photos of students
Rise in brazen thefts force convenience stores to close
Blasian Solidarity unites Philly's Black, Asian communities for good
5 people shot in North Philadelphia near Temple University
More TOP STORIES News