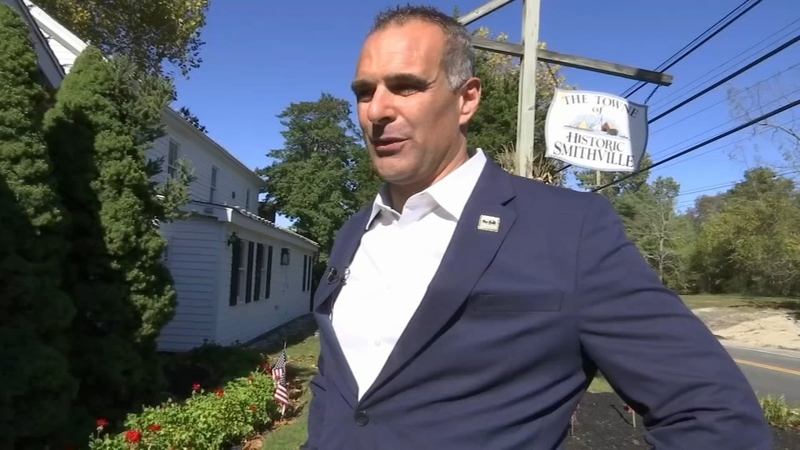 GALLOWAY TWP., N.J. (WPVI) -- Police in Galloway Township, New Jersey say they were able to catch a burglary suspect with help from the township's mayor - who was also a victim of the burglary spree.

"They got a small amount of cash but the real consequence was that they stole one of our maintenance director's keys," Coppola said.

Police say Dean came back a second night in a row, this time to the Coppola's other restaurant, the Smithville Inn. Coppola said the locks had already been changed, and this time the restaurant wasn't empty.

"I got a phone call from one of my managers saying that the suspect is back on property again," he said.

Coppola says Dean was trying to get in through a back door when he started chasing the suspect down Route 9 as he was on the phone with 911.

"I yelled for him to stop and he jumped the fence and continued on Route 9," said Coppola.

Police arrived and arrested Dean, saying he was wearing the same jacket caught on surveillance video the night before, and was in possession of the maintenance director's keys.

Word of the chase and arrest quickly spread.

"I'd call 911 but I wouldn't chase him. I'd give him whatever he wanted," said Sheila Zorzi of Galloway Township.

Police also say Dean is responsible for a recent burglary at a Spirit gas station down the street.

While police say they don't want citizens to put themselves in danger when they encounter crime, Coppola says he was happy to help.

"The only thing I could think of as I was pursuing this guy was - I don't want to let them down. Because I know it means a lot to catch these guys," said Coppola.
Report a correction or typo
Related topics:
galloway townshipburglarysurveillance video
Copyright © 2022 WPVI-TV. All Rights Reserved.
TOP STORIES
AccuWeather: Few Snow Showers Sunday
Police investigate 2 deadly hit-and-run crashes in Philly
Police: Man shot, killed in Philadelphia's East Falls section
All 100 lab monkeys accounted for after several escape crash
Montco health department ties 10 hepatitis A cases back to restaurant
Arnold Schwarzenegger involved in multi-vehicle crash
NYPD officer killed, suspect is from Allentown
Show More
How a 73-year-old grandmother outwitted a scam artist
Community organizers use basketball as a resource to curb violence
Shootout at Northern Liberties gas station
Driver dies in fiery crash in Port Richmond
Grocery stores faced with heavy impacts amid supply chain issues
More TOP STORIES News