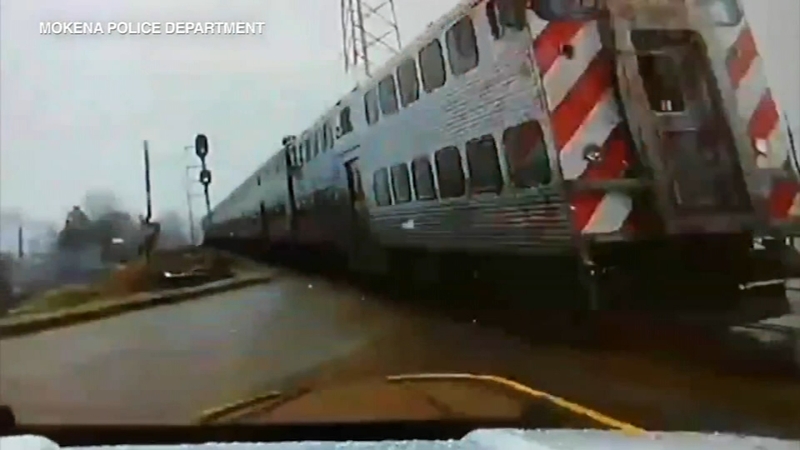 MOKENA, Ill. (WPVI) -- A police officer's dash cam captured the moment he narrowly avoided being hit by a train at a crossing in Mokena, Illinois.

The near-tragedy is being blamed on an electrical problem with the crossing gate. Multiple drivers have almost been hit at that crossing.

"Cat-like reflexes," said commuter Chris Blake. "He was lucky that he did. It would be a lot different if that wasn't the case."

It was also a close call for the driver in front of the Staglewicz.

Metra said the problem was an electrical short in the crossing gate. The equipment was repaired a few hours later, according to Metra, after precautions were taken to prevent future near-misses.

In posting the video on his Facebook page, Stanglewicz wrote he may have used a lifetime's worth of luck in that near-miss moment.
Report a correction or typo
Related topics:
amazing videofacebookdashcam videometrau.s. & worldpolice officer
Copyright © 2022 WPVI-TV. All Rights Reserved.
TOP STORIES
Building owner charged in fire that led to firefighter's death
Witness: Trump grabbed steering wheel, demanded to go to Capitol
Carry permits expected to skyrocket in NJ after SCOTUS ruling
Chestnut Hill neighbors in a pickle over pickleball courts
Epstein associate Ghislaine Maxwell sentenced to 20 years in prison
SCOTUS abortion decision: Women of color will likely be most impacted
Bryce Harper set for thumb surgery, Phils hope he plays this year
Show More
Black bear dies after getting stuck inside hot car in Tennessee
$6 billion will be infused into Navy Yard to make it a 'destination'
Grandmother of Uvalde school shooter released from hospital
Photos released of vehicle sought in Bridgeton hit-and-run
The official teaser trailer for 'Hocus Pocus 2' has arrived: Watch now
More TOP STORIES News