With three weeks until Memorial Day, there is a lot of work to do to get the beaches ready for visitors.
WPVI
By Trish Hartman 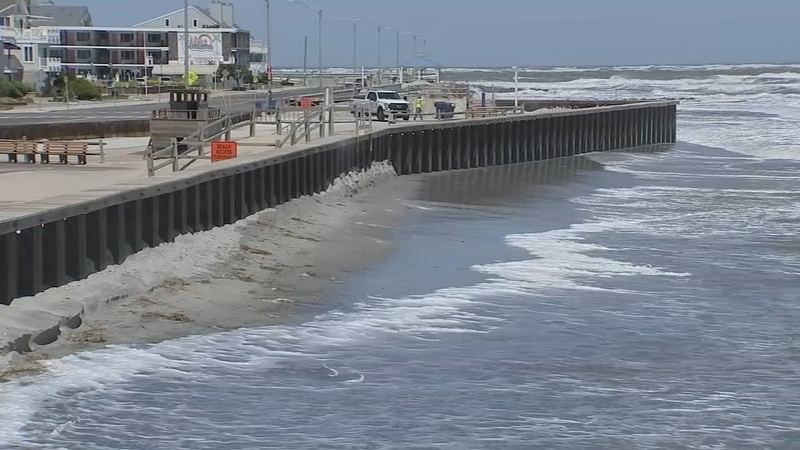 STONE HARBOR, New Jersey (WPVI) -- Many New Jersey beach towns are doing damage surveys Monday and Tuesday to assess the extent of the beach erosion after the weekend storm.

With three weeks until Memorial Day, there is a lot of work to do to get the beaches ready for visitors.

"It was incredibly windy. It was incredibly stormy. I took a few walks on the beach. We lost a lot of sand. A lot of dune damage," said Rich Fuchs, President of the Stone Harbor Property Owners Association, who described the conditions of the weekend storm.

The storm that hit the Jersey shore last weekend wasn't record-breaking by any means.

The strong winds did knock down a newly-framed home in Middle Township.

"The back bay flooding was minor which is great for the stores but it's mostly beach erosion," said Zeke Orzech of Cape May Courthouse, N.J., who owns commercial property in Stone Harbor.

But the timing of this storm is what's unusual.

"Unfortunately we had a winter storm in May," said North Wildwood Mayor Patrick Rosenello on Monday.

Mountains of sand piled up along the beach are stockpiles meant for beach replenishment, and this storm took about a third of that sand, according to Rosenello.

The beach was washed away at 7th Ave. and JFK Beach Drive.

Rosenello says now engineers and crews will adjust the plans and put in some overtime to get ready for summer.

"There will be a couple sections maybe in the low numbered streets that are going to have some issues by Memorial Day, but overall most of the beaches will be back in good shape," said Rosenello.

There is an Army Corps of Engineers project in development that would build a continuous berm or dune to help protect the Wildwoods from Hereford Inlet all the way down to Cape May, but that likely won't start construction until next year.

Avalon Borough officials say beach replenishment had just started, so while some sand was lost the project is still in decent shape and moving forward.