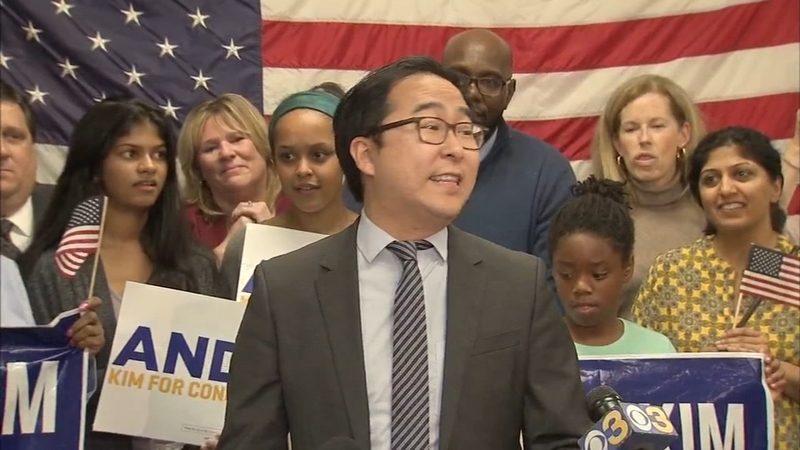 Kim claims victory; MacArthur says all votes not yet counted

"With the vast majority of the votes now in and counted, and based on the numbers we saw from Burlington County today, we have built a substantial lead," said Kim to a crowd of supporters Wednesday night. "I am proud to announce we have won this hard-fought race."

However, MacArthur is not in agreement and is not ready to concede.

MacArthur issued the following statement Wednesday night: "This has been a hard-fought campaign and like Andy Kim, I'm ready to see it come to an end. I have always said that I will be guided by the voters of the district and there are nearly 7,000 more of them who haven't been heard from yet. We must ensure that their votes - and all votes - are counted in a transparent way that protects the integrity of this election."

It has been a fierce battle between the two-term Republican incumbent MacArthur and Democrat Andy Kim, a former national security aide to President Barack Obama.

Both candidates were silent as roughly 6,000 absentee ballots were counted Wednesday in the Burlington County Board of Election headquarters in Mt. Holly.

MacArthur held a narrow lead overnight Tuesday, but sources said that could all change as the mail-in count is wrapped up. Tabulating the provisional ballots will be far more complicated.

"When we have the provisional ballots sorted out and logged we send them to the supervisor to be verified one by one, a long process, and they come back to us and we count them," said Tom Dugan, Burlington County Election Chairman.

Provisional ballots have also not been counted in Ocean County.

Around 12:30 a.m. Wednesday morning, Kim closed out the night at his campaign headquarters in Mount Laurel thanking his supporters for their relentless efforts.

"We knew that this would be one of the toughest and tightest races in the country. We've been saying that all along. That's exactly why we've taken the steps that we have," Kim said.

MacArthur did not speak at his election night party in Toms River, though Ocean County Republican Party chair George Gilmore did take the podium to show his support behind the candidate.

"Although we feel confident Tom is in the lead and he will move on to be successful, at least that's my opinion, unfortunately Tom cannot make a statement," Gilmore said.