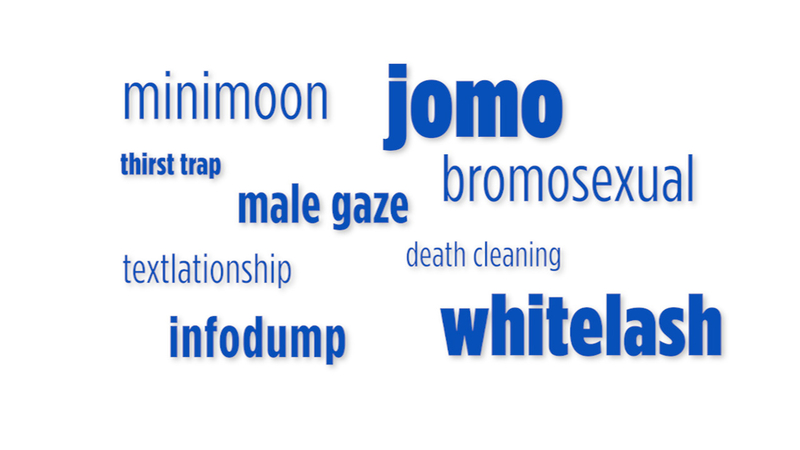 OAKLAND -- Do you know what whitelash means? How about minimoon or bromosexual?

These are just some of the words added to the website Dictionary.com.

Jane Solomon, a lexicographer is one of the people who read through social media posts and countless newspapers and magazines to come up with the list. She shared some of her favorites.

Afrofuturism: a cultural movement that uses the frame of science fiction and fantasy to reimagine the history of the African diaspora and to invoke a vision of a technically advanced and generally hopeful future in which black people thrive: this movement is expressed through art, cinema, literature, music, fashion, etc.

artifacting: Digital Technology. the introduction of a visible or audible anomaly during the processing or transmission of digital data.

back hack: to investigate (a computer or network hack) by following evidence from the point of the security breach back to its origin.

bracketology: Sports. a system of diagrammatically predicting and tracking the process of elimination among sequentially paired opponents in a tournament, especially an NCAA basketball tournament.

bromosexual: Informal. noting or relating to a close but nonsexual friendship between two men, typically a heterosexual man and a gay man (usually used facetiously).

Chicanx: of or relating to Mexican Americans or their culture (used in place of the masculine form Chicano, the feminine form Chicana, or the gender-binary form Chican@).

clickjacking: a malicious technique that causes a website user to unknowingly click on an undesirable link concealed by clickable content that is of interest, thereby tricking the user into making an unintentional purchase or revealing confidential information.

colorism: differential treatment based on skin color, especially favoritism toward those with a lighter skin tone and mistreatment or exclusion of those with a darker skin tone, typically among those of the same racial group or ethnicity.

crybully: a person who self-righteously harasses or intimidates others while playing the victim, especially of a perceived social injustice.

cybermob: a self-perpetuating group of people carrying out a campaign of online harassment that often includes ridicule and shaming or hate speech and threats, in response to reported news, stated opinions, published images, etc.

death cleaning: the process of cleaning and decluttering one's home so as to spare others, especially family members, from the chore of it after one's death.

false flag: an attack or other hostile action that obscures the identity of the participants carrying out the action while implicating another group or nation as the perpetrator.

Generation Z: the generation born after the mid-1990s.

glass cliff: a situation in which a woman or minority has advanced professionally at a time when adverse circumstances or crises make it more likely for the person to fail at the job.

infodump: Slang. a large quantity of backstory, or background information, supplied at once, often as a narrative at the beginning of a story, film, etc.

impostor syndrome: anxiety or self-doubt that results from persistently undervaluing one's competence and active role in achieving success, while falsely attributing one's accomplishments to luck or other external forces.

JOMO: Slang. joy of missing out: a feeling of contentment with one's own pursuits and activities, without worrying over the possibility of missing out on what others may be doing.

keyboard warrior: Informal. a person who posts highly opinionated text and images online in an aggressive or abusive manner, often without revealing his or her own identity.

Latinx: of or relating to people of Latin American descent (used in place of the masculine form Latino, the feminine form Latina, or the gender-binary form Latin@).

male gaze: the assumption in visual and creative arts that the default or desired audience consists of heterosexual males, and inclusion of women in narrative or art should seek to please this audience with the objectification or sexualization of these depicted women.

safe space: a place that provides a physically and emotionally safe environment for a person or group of people, especially a place where people can freely express themselves without fear of prejudice, negative judgment, etc.

sneakerhead: Slang. a person who collects and trades sneakers as a hobby, and who typically is knowledgeable about the history of sneakers.

textlationship: Slang. a relationship or association between people who text each other frequently, but rarely if ever interact with each other in person.

thirst trap: Slang. (on the internet) a social media post, especially a selfie or other photo, intended to elicit sexual attention, appreciation of one's attractiveness, or other positive feedback (often used attributively).

tone policing: a conversational tactic that dismisses the ideas being communicated when they are perceived to be delivered in an angry, frustrated, sad, fearful, or otherwise emotionally charged manner.

toxic masculinity: a cultural concept of manliness that glorifies stoicism, strength, virility, and dominance, and that is socially maladaptive or harmful to mental health.

virtue signaling: the sharing of one's point of view on a social or political issue, often on social media, in order to garner praise or acknowledgment of one's righteousness from others who share that point of view, or to passively rebuke those who do not.

welp: Interjection. an informal variant of well used to indicate disappointment, resignation, or acceptance at the beginning of an utterance.

white fragility: the tendency among members of the dominant white cultural group to have a defensive, wounded, angry, or dismissive response to evidence of racism.

whitelash: a hostile or violent reaction by white people to the advances or influx of other racial or ethnic groups.

womp womp: Interjection. Slang. an expression used to dismiss or to mock a failure, loss, etc.

womxn: a woman (used, especially in intersectional feminism, as an alternative spelling to avoid the suggestion of sexism perceived in the sequences m-a-n and m-e-n, and to be inclusive of trans and nonbinary women).