Council votes to crack down on 'rogue' tow truck drivers 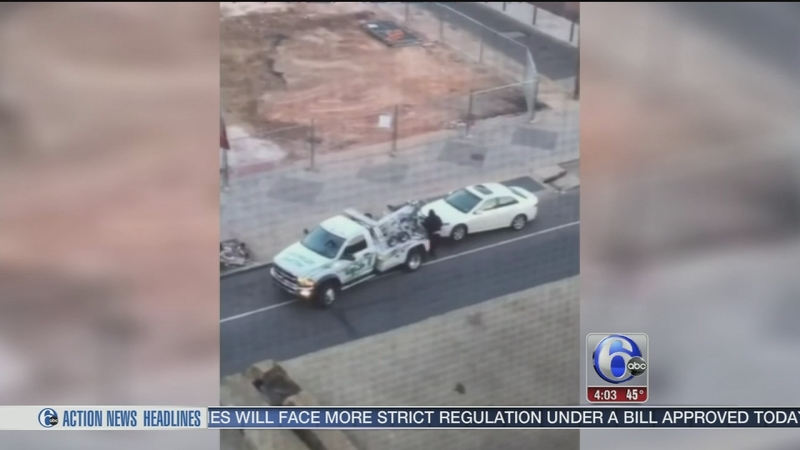 PHILADELPHIA (WPVI) -- Philadelphia city council approved a measure on Thursday aimed at cracking down down on 'rogue' tow truck drivers.

That legislation is designed to reign in an industry that, some say, steals cars off the street through various, unscrupulous tactics.

An Action News Investigation exposed a number of shady practices earlier this year.

The plan would make tow truck drivers wait until a vehicle has a parking ticket before they can remove it.

Earlier in the day, independent two truck drivers lined the streets outside City Hall with their vehicles, blocking a lane of traffic.

They were there to protest legislation that they consider to be unfair.

The bill's backers say it is a measure to crack down on rogue drivers, or private companies that remove cars that are not parked illegally.

"It's hard to legislate for bad actors and we know that and we're committed to working with the industry and, as a city, doing our part to come up with a better system. But in the interim, we've got to stop what we've blatantly seen, which is some folks stealing cars," said Councilwoman Maria Quinones-Sanchez.

The measure passed 15-1 despite the concerted opposition from legitimate drivers and a key council member.

"I understand her good intentions, but the devil's in the details, and these independent contractors who are tax paying, law abiding, non-predatory, are in business. As we try to fix something, they're going to put them out of business," said Councilman Curtis Jones.

"We do everything we need to do as far as paying L&I for our licenses, paying taxes, hiring people in the city of Philadelphia, and it's pretty much going totally against us," said Anthony Kitt of Kitt's Towing. "We have no say and no option."

"How could those who do parking lot and driveway enforcement be predatory, when it's the property owner, or the management company, who is calling us to tow these vehicles," said Lew Blum of Lew Blum Towing. "They have us mixed-up with another part of the industry."