"Our investigation identified a cracked 2-inch distribution main, which we believe is the root cause of yesterday's incident," Mike Kinney of New Jersey Natural Gas told New Jersey correspondent Nora Muchanic on Action News at noon.

"With that," Kinney continued, "the natural gas in the ground is going to follow the path of least resistance, (which) in this case was the structure."

Kinney explained that natural gas from the cracked main traveled along the outside of the underground pipe leading into the guest house at 59 Oak Avenue that exploded.

The leaked gas was then ignited by a spark, causing the blast.

New Jersey Natural Gas workers were going door-to-door Wednesday morning, restoring service one home at a time to the neighborhood rocked by the explosion Tuesday.

Residents of the Oak Avenue/Cedar Run section were being asked to have patience as service was restored to about 300 customers.

The work was expected to take most of the day on Wednesday.

Without warning a fireball erupts, throwing a massive amount of debris in the air.

The cruiser even shakes as the shockwave hits.

Authorities were evacuating homes when an officer's dash cam caught the explosion. 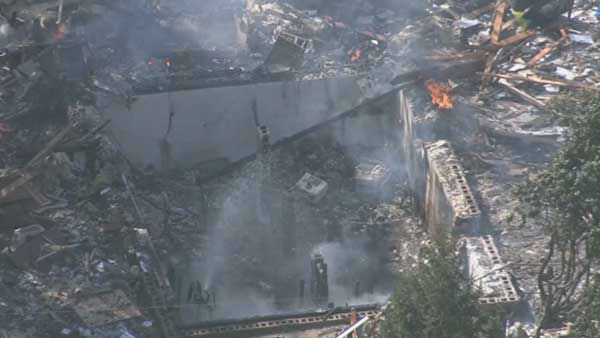 PHOTOS: House explodes in Ocean Co.
A house explosion in Stafford Twp., NJ resulted in a number of injuries and dozens of evacuations.

Among the 15 people who were injured include seven New Jersey Natural Gas workers, six firefighters and two EMTs.

Two of those injured were flown to the hospital and last reported to be in critical condition.

The injuries to four of those victims were described as non-life-threatening.

"We're very blessed and fortunate to have a lot of these guys here. A lot of them are volunteers," said Mayor John Spodofora. "Our fire department and first aid squad were there immediately."

Chief Jack Johnson of the Stafford Twp. Volunteer Fire Department said he had never seen anything like it. He estimates he was just 50 yards from the blast.

"It happened so quickly, the explosion - we had debris all around us, it came from nowhere. It's something you don't expect to happen," said Johnson, who suffered minor injuries in the blast.

"I saw one of my guys get knocked to the ground. It's something I never want to experience again."

The guest house belonged to a well-known family, the Reynolds.

"They are heartbroken over what has happened with the gas company employees, but quite frankly Mrs. Reynolds said homes can be replaced," Giberson said.

New Jersey Natural Gas spokesman Mike Kinney said workers were originally dispatched on Tuesday to investigate a report of a natural gas odor at the scene.

Soon after they arrived, the home exploded.

A number of other homes were also damaged in the blast.

Additional workers from New Jersey Natural Gas continued to look for a gas leak even after the blast, finally shutting it off shortly before 1 p.m.

New Jersey Natural Gas crews were at work into the night trying to repair the ruptured line that knocked out gas and precious heat to 300 houses.

Meanwhile, the Community Center at 260 East Bay Avenue was set up for any residents who needed shelter.

But no one showed up, most likely because neighbors were helping neighbors - and because a number of residents planned to stick it out for the night.