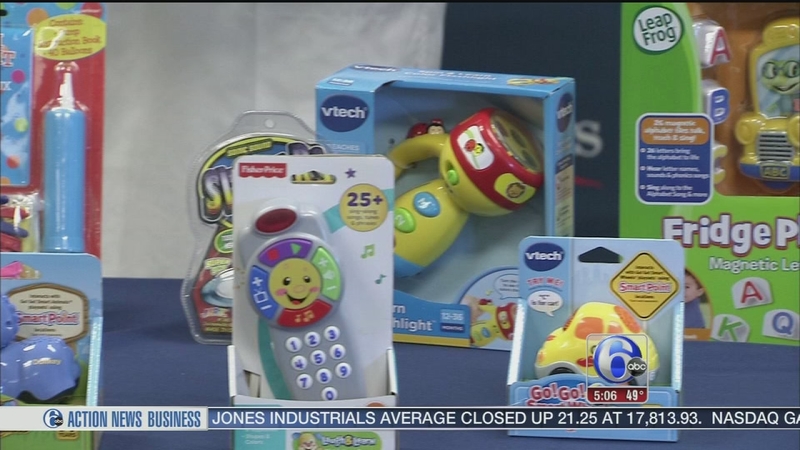 CENTER CITY (WPVI) -- The Pennsylvania Public Interest Group has examined hundreds of toys to see if they are safe and the results are disturbing.

PennPIRG said it found some toys with potential choking and noise hazards as well as one that exceeded federal standards on toxicity.

"Probably the most dangerous thing in a pediatrician's mind that a child can get into is a button battery," said Dr. Gary Emmett of Nemours DuPont Pediatrics at Jefferson.

If swallowed a button battery can burn a hole in a child's stomach.

And PennPIRG has warnings against other items including the Vtech Spin & Learn Color Flashlight and the Fisher Price Click n Learn Remote which the group said can be potentially harmful to a child's hearing, especially if held close to the ear. PennPIRG said between the ages of 6-17, one in 7 children has hearing damage. Other toys, they claim, with noise related concerns are the Vtech Go! Go! Smart Wheels, Vtech Go! Go! Smart Animals and Leap Frog Fridge Phonics Magnetic Letter Set.

Another major problem is with balloons.

"Balloons are the leading cause of choking hazards in children," explained Stephanie Monahon of PennPIRG.

Monahon continued by stating the group's preliminary testing found high chromium levels in a miniature slinky and a pencil case that contained a metal lock.

"(Chromium) It causes a skin reaction, so it could be redness, swelling, ulcers or if its ingested it can cause cancer, she said.

U.S. PIRG has been releasing its Trouble in Toyland report for 30 years which has led to more than 150 recalls and other regulatory actions. They are now encouraging the Consumer Product Safety Commission to do further testing on the toys it has highlighted.

Other problems PIRG found include toys that have phthalates. PennPIRG said Fun Bubbles jump rope had 10 times the legal limit of the banned phthalate DEHP.

The group also warned against toys with small parts including balls that can block a child's airway. If you are wondering how to test for a choking hazard in your home Monahon suggested using an empty toilet paper roll.

"If it fits through the hole then it's too small, your child under 3 should not have that," she said.