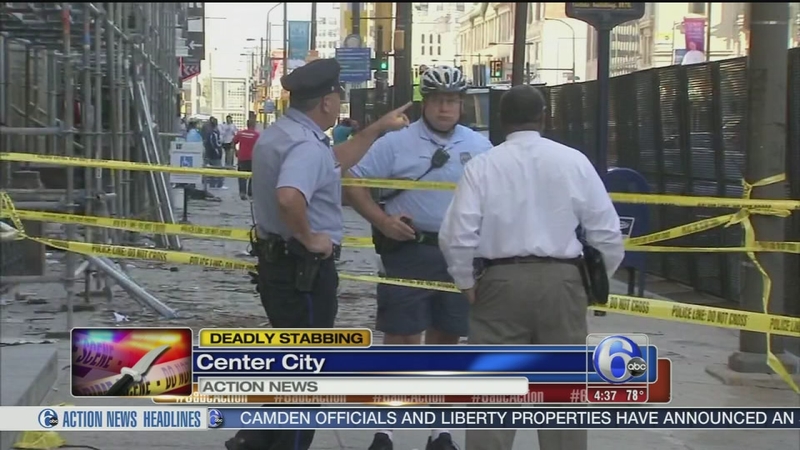 The incident happened after 6:45 a.m. outside the JFK Behavioral Health Center on the 100 block of North Broad Street.

Police say a 47-year-old man was found with a stab wound to his chest.

Medics took the victim to Hahnemann Hospital where he was pronounced dead.

"They're still looking for witnesses, possibly interview some witnesses as well or any type of surveillance cameras that may have been in the area," said Lt. John Stanford of Philadelphia Police.

The stabbing happened in the shadows of flags bearing the pope's image across the street from the Convention Center where thousands of visitors are gathering for the World Meeting of Families.

But, police say the incident had nothing to do with the event.

Vaughn had accompanied his girlfriend to the bus stop when he got into an argument with someone else.

"This is not a visitor, it was a resident of Philadelphia. That doesn't make a difference, a homicide is a homicide," said Stanford.

They're not sure if the victim knew his attacker, but police insist there's no danger to guests.

"We don't have any concern for any individuals that are here for the World Meeting of Families. This seems like it was an isolated incident. It was an altercation, an argument between these two individuals. At this point in time we don't know if they knew each other," said Stanford.

If you have any information, you are urged to contact Philadelphia police.