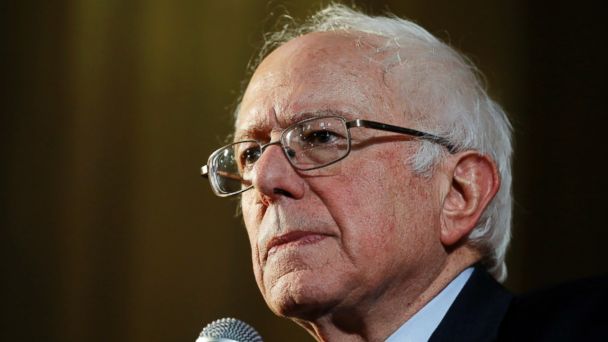 At a rally in Pennsylvania Wednesday night, Bernie Sanders declared that rival Hillary Clinton is not qualified to be commander in chief.

The Vermont Senator cited her past policy positions and votes, and her acceptance of substantial donations to her super PAC.

But earlier in the day, Clinton implied it was Sanders who was not ready to lead the nation, Sanders said.

"Secretary Clinton appears to be getting a little bit nervous," Sanders told a crowd of thousands at a rally at Temple University in Philadelphia. "She has been saying lately that she thinks that I am quote unquote, not qualified to be president. Now, let me, let me just say in response to Secretary Clinton, I don't believe that she is qualified, if she is, through her super PAC, taking tens of millions of dollars in special interest donations."

Clinton, however, did not explicitly say Sanders was not qualified for the presidency. On MSNBC's "Morning Joe" Wednesday, the former Secretary of State chided Sanders for his recent interview with the New York Daily News' editorial board, where he seemed to stumble with answers about how exactly he would break up the country's largest banks and pass some of his other policy agenda items.

"I think he hadn't done his homework and he'd been talking for more than a year about doing things that he obviously hadn't really studied or understood, and that does raise a lot of questions," Clinton said.

Clinton spokesperson Brian Fallon tweeted, "Hillary Clinton did not say Bernie Sanders was 'not qualified.' But he has now -- absurdly -- said it about her. This is a new low."

Sanders campaign responded, saying that several articles, including one from the Washington Post paraphrased Clinton's comments as saying the he was not qualified.

On the campaign trail, Sanders often talks about the difference between his record and Clinton's when it comes to trade deals. In Wyoming Tuesday he said one of the reasons he originally opposed the Panama Free Trade agreement was because of the potential for tax evasion, a reality that has come to light in recent days after a leak of documents that revealed corporations and political leaders with extensive offshore accounts. By Sanders' rubric, however, President Obama, who signed the Panama Free Trade Agreement, would also not be qualified to be president.

During an interview with ABC News' Cecilia Vega, Sanders listed several others reasons why he believed Clinton was not suited to be President, including Clinton's support of the Keystone pipeline and the Trans-Pacific Partnership, which he claims hurt her qualifications. Sanders, however, said his qualifications included "fighting for working families" and taking on "every special interest in this country."