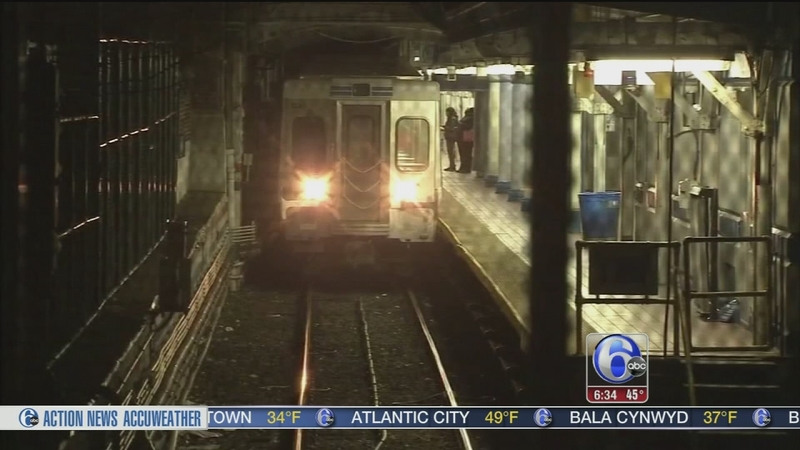 PHILADELPHIA (WPVI) -- SEPTA says a temporary shortage of rail cars during peak hours will continue, following the discovery of cracks in the support beams of two cars.

Officials expected to have more trains operating on the Market-Frankford Line by the Monday evening rush, after some cars were taken out of service over the weekend.

Not too crowded at Bridge & Pratt MFL ... @6abc pic.twitter.com/dLp6KHGOLG

There are normally 24 trains operating on the line. 16 were running on Monday morning, and 18 were expected by evening.
Extra buses are also running to help carry the load.

Still, officials warn those who use the line to give themselves more time heading to work on Tuesday and beyond.

Over the weekend, cracks in what is called the body bolster, or support beam, were discovered in two cars, prompting the agency to remove other cars that showed signs of similar issues.

SEPTA has 218 Market-Frankford cars. A complete inspection found two cars with bolster cracks, but 58 others with cracks in an adjoining nonstructural vent. What is most worrying, officials say, is it's believed the cracks began in the vents and then spread.
"We believe it's going from the vent to the beam," said General Manager Jeffrey Knueppel.
What SEPTA doesn't know is why the cracks are developing on the 60 cars, nor how to fix them yet. Knueppel said the agency would not rush out a bad fix.

"It is a complicated area, and it is the highest stress area of that beam, so we want to move quickly but we don't want to rush and make a mistake," said Knueppel.
SEPTA says customers may experience delays and crowded conditions along the Market-Frankford Line. The line runs as a subway downtown and is elevated in west and northeast Philadelphia.

Last summer, the agency had to take about one-third of its regional railroad fleet out of service because of a structural defect.