Waitress' kindness to firefighters leads to outpouring of charity 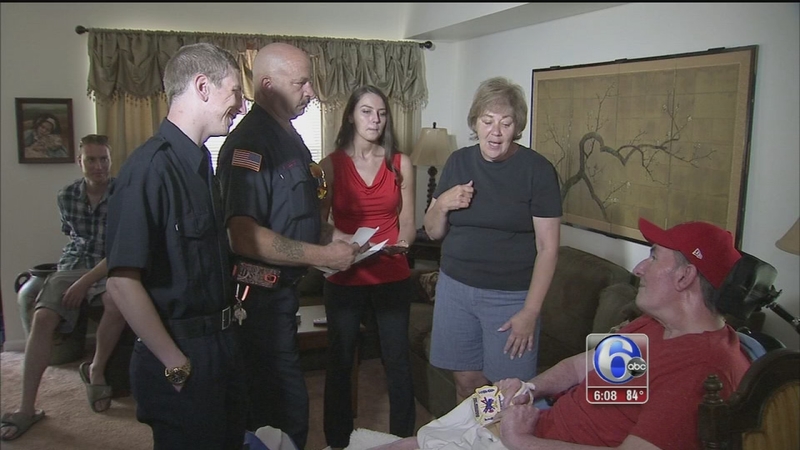 VIDEO: Firefighters meet family of waitress who paid for meal

DELRAN, N.J. (WPVI) -- The two New Jersey firefighters, who have been trying to raise money for a waitress and her sick father after she treated them to breakfast, met the family they're trying to help on Sunday.

Action News was there as volunteer firefighters Paul Hullings and Tim Young met the family of Liz Woodward for the first time.

Their lives were unexpectedly drawn together by Woodward's now famous act of kindness while working the overnight shift at the Route 130 Diner in Delran last week.

"All I did was pay for their breakfast, and I didn't think anything would come about it except they would leave with a smile," Woodward said.

Rather than hand them the bill, Woodward gave them a note that read, in part, "Your breakfast is on me today. Thank for all that you do."

Touched by the gesture, the men decided to pay it forward once they learned Woodward has been trying to raise money to buy her paralyzed father, Steve, a wheelchair accessible van.

"It's essentially been sharing the word as much as possible, from sharing it on Facebook to talking to people at my full time job," Young said.

The story went viral and donations poured in. By Sunday afternoon, the account has more than $56,000, which may be enough to buy that van.

And while Woodward is excited by how the donations will help her father, she hopes the story sends a message.

"The message is to be kind to each other, to pay it forward when you can, that even the smallest gestures can change somebody's life. My entire family is living proof," said Woodward.

During their visit, the firefighters gave Steve tickets to a Phillies game. That could be the first time he leaves the house, other than for a doctor's appointment, in five years.