On Saturday, Pennsylvania State Police said the sighting was 'Highly Credible' and they are considering it an important new clue in the five week manhunt.

The sighting happened Friday night near the woman's home not far from Pocono Mountain East High School, where Frein attended.

The woman did not want her identity revealed.

"He was wearing a dark navy wool cap that was rolled up at the ends," she said.

She told Action News that she was out for a walk when she spotted a man with a rifle by an empty house and an abandoned truck.

The woman says she didn't realize, at first, that it was possibly Frein.

"He had actually turned towards me and that's where you could tell the mud on his face and the height he was based on the truck he was standing next to. You could clearly tell it was a gun, a rifle with a scope attached to it. It looked as though he was looking for something or looking which way to go. He avoided making eye contact, I had the light shining on his upper half and his face was kind of confusing. This guy was not startled by me," she said.

The woman says she immediately ran to her house and called police.

She says she has been questioned 10-15 times. Her story triggered a flood of FBI and other law enforcement personnel to the area.

Frein has eluded hundreds of officers who have been tracking him for more than a month. He is charged in the Sept. 12 shooting that killed Cpl. Bryon Dickson and wounded Trooper Alex Douglass.

Police continue to comb the woods looking for him.

Meanwhile, officials say schools in the area will be open Monday but with added security. 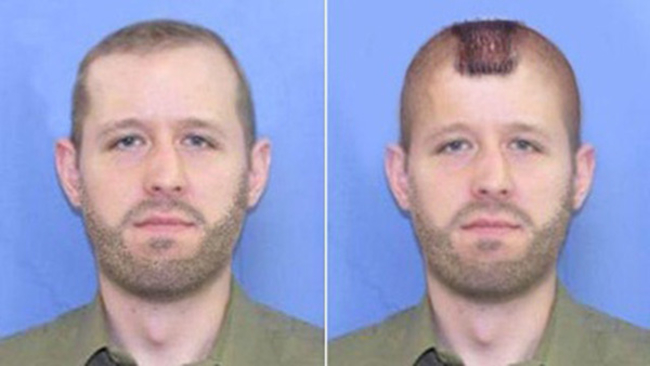