NFL Draft had economic impact of almost $95 million for Philly 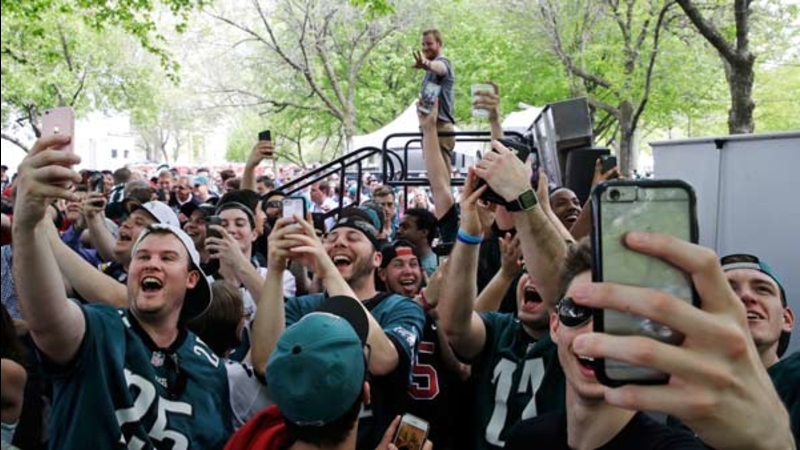 PHILADELPHIA -- April's NFL draft had an economic impact of almost $95 million for Philadelphia.

According to a report commissioned by the Philadelphia Convention and Visitors Bureau and conducted by Temple University's Sport Industry Research Center, direct spending during the three-day event in April was $56.1 million.

Temple's survey showed the draft attracted attendees from 42 states. Proceedings were held at the city's iconic Art Museum, with the Rocky statue at the top of its steps, and drew a record 250,000 attendees.

Final day for the NFL draft on the Parkway. Trish Hartman reports during Action News at 6 on April 29.

"When we chose to pursue the draft, we did so with the goal of an economic win for our city and region," says Julie Coker Graham, PHLCVB President and CEO. "We are thrilled that not only did it generate substantial economic activity for Philadelphia, but we were also successful in showing the world that this city is a premier destination for sports, big events and tourism in general."

The NFL began moving the draft around the nation in 2015, going to Chicago for two years. Philadelphia was next, and 20 cities, including Philly, have expressed interest in hosting an upcoming draft. Representatives from 16 cities attended this year's event.

"Philadelphia was a great partner and the Eagles were with us from the beginning," says Peter O'Reilly, the league's senior vice president of events.

"We were able to create a footprint right in the heart of the city. We didn't have the separate theater and fan festival, we brought it all together as one and in an iconic setting, and allowing so many people to feel connected to this draft.

"Obviously Chicago set the bar for the new draft model and Philadelphia took it to another level in terms of the energy and the site and connection to the crowd."

So the draft will return to Philly next year, right Peter?

O'Reilly chuckled while demurring as the bidding process continues.

"We have that option to return to Philly, and they did help us create an extraordinary event," he says. "We'll be announcing a site sometime in the fall. One of the reasons we're being methodical is we learned a lot from Philadelphia this year, and other cities are learning about how they might best showcase their city, tied to a draft. It has piqued or sparked people in cities with ideas around how you can do something."

After 93 percent of visitors surveyed cited the draft as their primary reason for visiting Philly, 79 percent said they would recommend Philadelphia as a travel destination, and 62 percent intended to return to Philadelphia for a vacation within the next 12 months.

"Overall, the event performed incredibly well across multiple key metrics, including the opportunity to once again position Philadelphia as a premier U.S. destination," Coker Graham says. "The economic impact that the draft generated was similar to other large-scale marquee events we have hosted of that size and scale."

Altogether, more than 30,000 jobs (914 full-time equivalent positions) were supported by the draft, which helped generate $38.5 million in personal income, $7.9 million in state and local taxes.