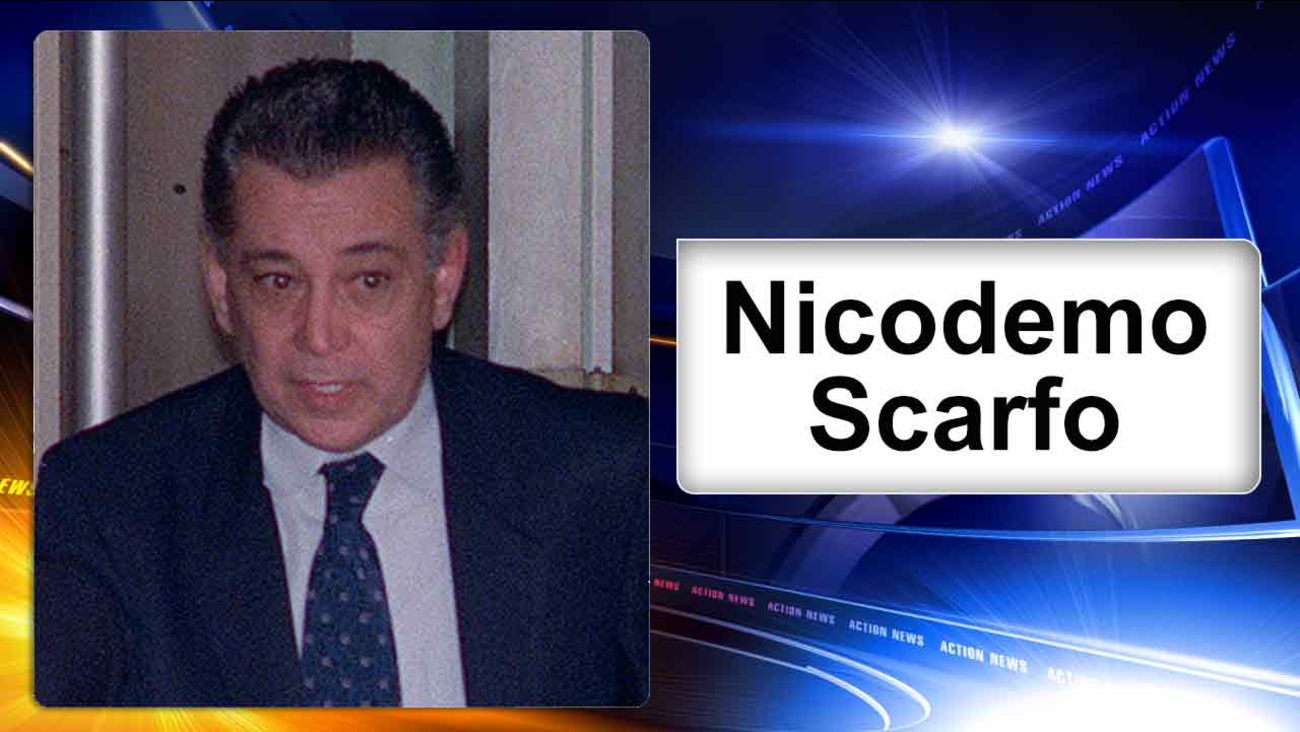 PHILADELPHIA -- Nicodemo "Little Nicky" Scarfo, whose reign over the Philadelphia Mafia in the 1980s was one of the bloodiest in its history, has died at a federal medical center in North Carolina, a prison spokeswoman said Tuesday. He was 87.

Scarfo died Saturday while in custody at the Federal Medical Center in Butner, North Carolina, said Nancy Ayers, a Bureau of Prisons spokeswoman. No cause of death was released.

Scarfo led the Philadelphia-southern New Jersey mob from 1981, when then-boss Philip "Chicken Man" Testa was killed by a nail-bomb outside his home, until around the time he and more than a dozen associates were convicted of racketeering charges in 1988.

Scarfo, described as 5-foot-5 with a high-pitched voice, was "a greedy, ruthless despot" who reveled in "wanton, ruthless and senseless violence," Philadelphia Inquirer reporter George Anastasia wrote in his book, "Blood and Honor." The Philadelphia Daily News once called him "the undersized Atlantic City man with the oversized temper."

Ultimately, Scarfo's vengeance and mismanagement forced several of his associates to be witnesses for prosecutors. One of the men, Nicholas "Nicky Crow" Caramandi, said his hand was forced because he believed Scarfo, widely described as paranoid and egotistical, was ready to kill him.

Scarfo, a long-time soldier, rose to prominence soon after the assassination of mob boss Angelo Bruno in 1980. Bruno, known as the "Docile Don," kept a tight rein on his associates' illegal activities and led a Mafia that made money without a hint of flamboyance.

But Bruno's killing set in motion a mob war that lasted more than half a decade and left more than two dozen mobsters dead.

Federal prosecutors said Scarfo's crews made money the same way La Cosa Nostra always has - through extortion, gambling and loan sharking. But they also accused Scarfo of embracing the drug trade and said he frequently resorted to murder.

Scarfo's undoing began in 1986, when he was indicted for trying to shake down a developer who wanted to build a project on the Delaware River waterfront. Scarfo was convicted of conspiracy to commit extortion in the case, which also brought down a corrupt city councilman.

His reign finally ended in 1988 when he and 16 others were convicted of racketeering. The federal indictment had accused the men of participating in a criminal enterprise that killed nine people, tried to kill four others and participated in extortion, gambling, loan sharking and drug trafficking.

Prosecutors relied on FBI wiretaps of mob meetings and the testimony of two reputed mobsters-turned-informants, Caramandi and Thomas "Tommy Del" DelGiorno, who detailed killings, extortions and other deals.

Scarfo and seven others were convicted in state court of murdering mob associate Frank "Frankie Flowers" D'Alfonso in 1985. The 1989 convictions were later overturned and all eight were acquitted at a second trial.

The various trials painted Scarfo as a "greedy, small-minded and violent terrorist who climbed to the top over the dead bodies of onetime associates," Anastasia wrote. "There was no sense of charisma; not even a hint of the old Mafia mystique. Scarfo was a bully with a gun."

Organized crime investigators said Scarfo's concrete company, Scarf Inc., laid the foundations for many of the casinos erected in Atlantic City, New Jersey, in the years after gambling was legalized there. It was an arrangement he enforced through his associations with local unions, authorities said.

Scarfo graduated from Benjamin Franklin High School in 1947, where classmates voted him "loudest," ''most talkative" and "best cutter."

Scarfo was reputed to be a numbers-runner when, in 1963, he and two companions got into an argument with a longshoreman at a South Philadelphia diner over who would sit in a booth. The longshoreman was stabbed to death; Scarfo pleaded guilty to manslaughter and served six months in prison.

The violence reportedly angered Bruno, who banished Scarfo to Atlantic City, to run the family's outpost there.

Scarfo served time for refusing to testify about organized crime before a New Jersey commission in 1971, a prison stint that reportedly raised his profile in the organization. He later served two years in federal prison for illegally possessing a gun.